Amazing race on an amazing course which resulted in nothing less but 1st place!
I think I had too much fun that day, even though it was a race and it was a rough one... 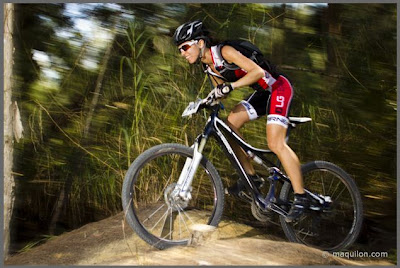 A history of long days, weeks and months that I spent on those root infested trails finally did pay off. I remember getting beat up and thrown off my bike numerous times, going home punished by the terrain to heal my wounds just to come back the following week for more. Can't really tell why but I love this place. The moment I went there on my old 37 pound heavy mongoose bike some three years ago I could not stop myself from returning again and again. Every new ride was a new challenge and every new ride was a new victory. This was the inner battle and never ending adventure that made me feel alive. I found a new calling and never looked back; this was a beginning of the new chapter in my life... 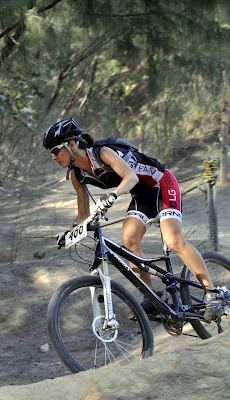 Now going back to the race... The best race I can remember in the physical and mental aspect of it. So the gun goes off. Start was not sluggish but also not fast, after all we had over a month of rest from racing. I saw few girls going a bit faster than me, but then we got to the first corner, I got it; I stood up and was able to make top 3, all good. Going to the second corner on the spilled loose rocks, well I knew it could have been bad and I tried to take my time but the corner got tight and two other lead girls on my sides. I followed the lead girl just to find myself seconds later fumbling in giant palm leaves slapping me and her in the faces with no clear view of where to go. We both said “holy sh.t”, “damn where do we go now?” and we had to backtrack to get back to the course. I think some other girls also had some issues and took wrong turns. It was weird start… In the meantime the third girl took the lead and we sprinted after her into the woods. Minutes later when still huffing and puffing I was able to start settling slowly into my race mode and just ride my ride. It got better and I could see for the first whole lap two lead girls right in front of me. When going through the first lap check point I was some 10 seconds behind, made my turn and cranked it up. Girls looked little relaxed so I got even closer. Hmm I did catch up with no problem and made my pass to the second position on the first twisty technical trail the Strangler Fig. Few minutes later we had little opening coming up and this is where some nutrition could come handy, that was the plan at least.  I had lead girl right in front of me and was about to reach for my gel when I heard quick buzz next to me and got quickly cut off by the third rider. Oh well there goes my gel time! I had to speed up and tried to get my spot back, but it didn’t work out so well since our wheels where right next to each other and the girl was not going to let me in. So in the nice straight line one by one just feet apart we went to the Dragon’s tail. Going through rocky beach area and very rooty section I made my pass again. 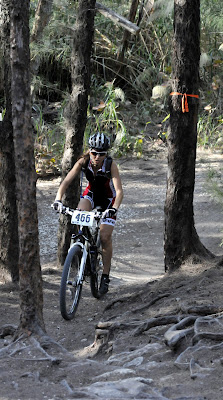 I had just one girl in front again and was trying to make my move, tried here and there but no go. It was little opening right before small technical section that almost no one can make in this whole race. I tried to pass there but instead there was a sharp left turn and I being on the inside I got only cut off and slapped by the branch in my face. How nice. So went in the hilly place sitting on the wheel of the lead. Now question is, is she going to go left or right since there was a fork. One choice was a steady but rocky narrow climb and second going to the right on the sudden steep sandy hill with big roots on top that make it impossible. She made a left, so I made a right. I could hear the noise of shoes unclipping and fumbling on the rocks, while I did my part and unclipped and pulled my bike over the roots. It was a race to the top and who can mount the bike quicker. Oh that was fun. I made it, jumped on my bike unclipped and zoomed down. Clipped in for the next hill and cleared the section. After this was beautiful opening where you need to fly to get up our famous Oyster Ridge climb that consist of never ending bed of rocks and roots, going up and up and up with scary clown laughing at you at the top!
I stood up and pushed, I fought those roots so hard; it was not the time that I was going to let the scary clown win. I made it, all the way and all the way thereafter. I was told later that I was the only girl in my group that made it to the top. The course was mine now and I enjoyed the ride... The next fun place was the Goldstick trail which is all fun BMX like rolling hills. I and my husband used to race this one for fun often; we always had some crazy bet going there.:-) And you know what, I said to myself: if I can fly on it racing my husband I can fly now too when it really matters. So I did, I rode and rode and rode and loved it. I did catch up with my close friend from different class and screamed out loud to him huge "Hi", since I'm always so happy to see him on the course. Those little things sometimes just make you happy, just to see friendly face and fellow rider, and have someone to cheer you on.

On those few final trails I was able to make a gap of one minute on the second girl and two and a half on the third. Survived last infamous rocky mile trail and was on my way to the finish. There was a rider in front of me almost falling on the street crossing and blocking my path. He washed out on the rocks, I told him to go; but he was going very slowly and unsure. I caught up with him and we exchanged the look, the look that made him suddenly stand up and sprint for the finish, I put a big smile and said let’s go, let's do it!

And we did, we raced side by side to the last turn, sprinting as hard as we could and right before the finish line I let him go. It was fun and good way to finish the race. I crossed the finish line with big smile on my face. There was no one behind me, none that I could see, I was first! It was a great, super awesome feeling. 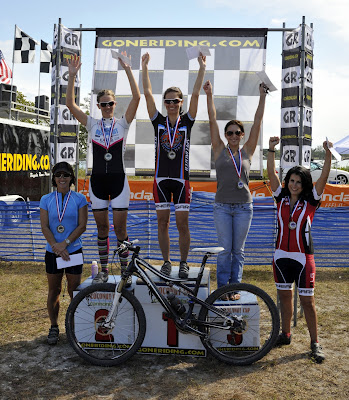