“You gain strength, courage and confidence by every experience in which you really stop to look fear in the face.” 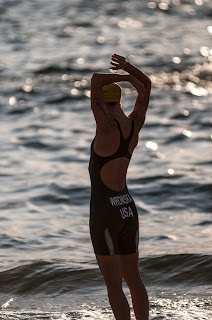 Pompano Beach Piranhas organized an amazing open water race. I stumbled across it and right away new it was something I need to do for myself to fight my demons. I always had fear of open water and now when living in Florida it become worst because of what we do have here in those waters of Atlantic Ocean compared to what I had in the Baltic Sea back in Poland. Over there worst case scenario was stepping on little flounder that is hiding in the sand, here for change oh well, we all know what swims here…
Either way I did sign up for a race however feeling little apprehensive. I went to the race site with my husband Pax on the beautiful Saturday morning right before a sunrise. The moment we arrived to the beach and I saw the venue and tents set up and Pompano pier and music playing and beautiful sun rising above the water I was happy that I woke up so early for this experience. All the swim teams arranged their spaces and everyone was energized. I felt nervous. I got my standard cotton mouth feeling and my heart was pounding long time before the race started. I am not a swimmer. I love to swim but I am mostly and pool swimmer and it was a day when I had to go there quietly like a little warrior and prove to myself that I can do it. 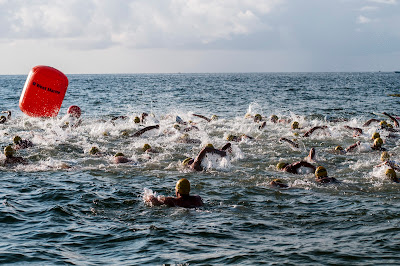 This was the weekend also of Tropical storm Isaac that just went by and it left water very murky and angry looking. It was not a typical Florida beautiful blue ocean look and feel, it was rather looking like a brownish lake and it definitely wasn’t going to help me feeling at ease. I went in for a warm up and could not really see anything in the dark water. The buoys were some 40 feet out from the shore and I had no courage to even check how are the views were from there. Well until I had a young girl and a young boy approaching me with a high concern or the swimming in the ocean. Those little guys were about to do their first open water race of 500 meters. On instant I had to be become stronger than I felt, and not just for me but for them. They had the same fears that I had and I did assure them that everything is going to be fine and decided to lead them to the first buoy to see what we can find there. I started first and they followed, in a matter of seconds we were there and to our surprise we still could see through the murky water bottom and even I was able to stand there. We turned back and swam to the shore. It was better than we expected and now I knew I most likely will be able to see bottom of the ocean for most of my one mile swim. Oh this 750 meter buoy was far, so far but I was ready.
This was not however mountain bike race or a triathlon, but a swim race and I just felt on the start line little like fish out of the water. I realized those swimmers were going to smoke me. But I also talked to few nice ladies before the start and I realized I was not going to be last.
And there we went, everyone crashed into the water at the same time. In no time I got hit on the head and my goggles had been moved on my face and water got in. I moved them quickly back but there was some water still there that I will be swimming with for a whole mile. First buoy was a pileup also but very unexpectedly I stayed completely calm. After that we had 750 meters going straight parallel to the beach. Right away I found some feet and felt not so bad. Wavy sand close below me gave me sense of security. I was still surrounded by lots of people and I felt safe. After a while there was a 500 m buoy and 750 m buoy. From all this swimming I was not sure any longer which one I was approaching. I told myself it is probably the closer one to don’t disappoint myself, however after a while I noticed that everyone in front of me was turning, great news, meant it was a last buoy and we were on the way back. After the turn however everyone seemed to disperse. I lost the guy that I followed. I had no one near me or behind me and after a long while I was able to spot still far away group on the front. I was alone, water was dark and we were going now closer to the shore. Waves started pounding on me little more and I started getting very tired since now I was going against the current and when I looked down on the bottom of the ocean it seemed as I hardly was moving, but I was trying so hard. Now I could only hope to pace myself appropriately so I can just finish the race. In the mean time I started getting closer and closer but still group was out of my reach. One time something dark felt like went over me, I looked quickly back over my shoulder. I thought of the worst, I thought of some “big fish” being right next to me. But I just saw nothing and most likely it was just big wave that went over and created this shadow that you could take for something else. 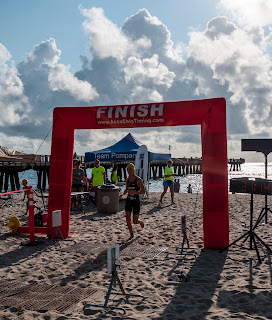 Since then I started to focus on the final buoy that I finally could see. I made my final turn and headed to the shore. Some thirty feed of soft sand divided me now only from the finish and I still remember how tiring every step felt after this long swim. But I was done. And girl running right in front of me happened to be in the same group as I was.
I finished in pretty decent time in my swim book of 31:16 min and it gave me 5th place in my age group. Only 17 seconds away from 4th. Top three girls had however untouchable for me times and I can only admire their swim capabilities.
Overall I am very glad I decided not to sleep in that day and see beautiful sunrise, challenge myself, overcome my fears, meet great bunch of people and have really good time on the beautiful beach. Another good day in our days of adventure book…