And the final race of the South Florida Series is here.

After a few days of cool weather which was topped with riding in 50 degree weather during my 12 hour race (which was pretty cool!) out of the sudden we got reality check and reminder that we are living in Florida! 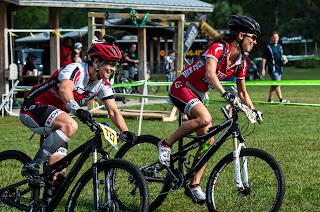 Out of nowhere temperatures skyrocketed and were going from 80 to 83 to 87 degrees on race day.

This is way too hot for February! On the pre-ride Saturday it was already warm but the race morning lifted up all the cloud cover that was there during our ride to the race site. Suddenly it was humid, hot and super sunny. To add to it, the trail system had close to none of tree cover. Such a bummer… 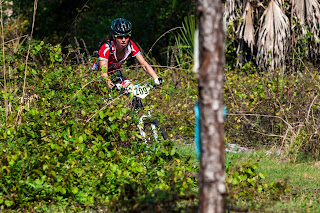 It is way easier to race and keep your heart rate down in the cooler climate. The course was flat, bumpy and goes left to right for what seems like a never ending 7.5 miles. I’m going to have 3 laps of this sweetness today. On the start, Jane my main competitor for the title was all focused and ready, plus Melissa whom I’m very happy decided to join us today. Making strategic plans would be difficult for this day, considering that the course is not like any other ones we normally race on, plus I just biked 100 miles non- stop only one week ago. I knew that was not going to be easy. Depending how my rival decides to approach the race, I was there to go simply from there. 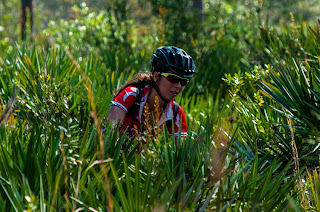 Not to my surprise despite not having tons of competition today I had just enough to test my limits.

﻿﻿Jane took off like a bullet from the start line; I had some fun with it and decided to challenge her. I catched up to her and got to the inside on the turn. With her being on the outside she was at mercy of my pace, little more of sprinting after the turn and I just let her go. Biking fast on the grass is exhausting and we had a long way to go before heading to the single track and we were already on the brink of passing out. 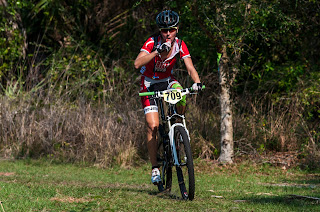 For me the story was repeating itself from what happened last year. I was challenged so much by one competitive rider that the whole race we ran on redline.

The tight and twisty single track was attacked as fast as possible and the straight a ways even faster. 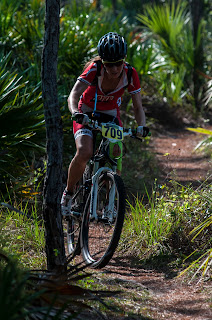 I was some 30 seconds behind at times. At 4.6 mile point I remember looking down at my gps and not believing that I am just at the beginning and I have a full 22.5 miles to do on this course. I was exhausted and Jane would not show any signs of slowing down. I was pretty happy I forgot to put my heart rate monitor on because it would be better for my mind not to see how hard I’m being pushed today. 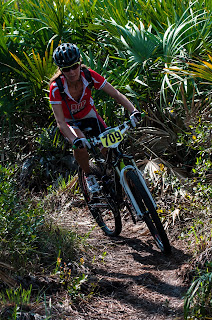 I just felt hot, very hot, out of breath, and just remember getting hit again and again by every single root and bump we had to go over. On the second lap I still had some distance to gain but at some point I started slowly to keep getting closer.  But even with going all out the seconds gained were still not significant enough. On the final lap going through the shoot I had Jane in front just coming out from it and race director announcing that I’m keeping a close gap on her. Crowd (well Josselyn!) yelled “She is right there!”, “Go Beata”.  And it didn’t take me long and finally on the 3rd lap I was behind on Jane’s wheel. I felt better now knowing she is within my reach and stayed with her pace for quite a while assuming this was my opportunity to rest up until I will make my move. Unfortunately it is not as easy as suspected on this track, which is very, very narrow… I made a few attempts and it seemed like mission impossible. 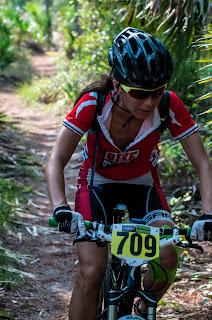 One foot wide to bike on and big palm trunks just outside of it were stopping me from being able to go by.

﻿﻿On occasional turns with tiny spots of relative clear brushes I tried a few times to make a pass on the inside, while Jane would every single time just stand up and make sure my attempt would not be successful. After a while I mentioned to her, “So there is no way you are going to let me pass?” and she said “Nope. You will have to earn it!”.  My only chance would be as anyone would say only to try to pass on a few straight a ways in between the whiny single track. And that would be all correct if Jane wouldn’t be simply a stronger sprinter. So each time when we got out from the tiny trail to the open, she stands up and hammers away and I’m just trying to hold on. Than we go back to the shrubbery and she slows big time down and holds up the whole path. 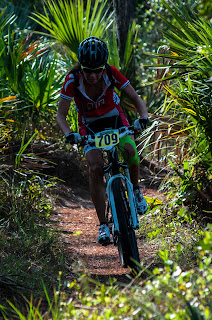 This cat and mouse game lasted for a long while and I realized we pretty much had maybe 2 last openings to go since we were approaching the final 2 miles and it was quite certain that she would outsprint me just by seconds to the finish. So even though I was more capable at that time on the single track I had no means to get around and get away. Well unless I stayed close and just waited. There was still some 1.5 miles to go from a 22.5 mile course and out of nowhere I see Jane sliding sideways. It seems like she was too much of the rush and she clipped one of the small trees standing so close to each other. We had to bike in between them. The moment her bike went down, my front wheel was already touching her back wheel still being on the ground. I saw she was fine and attempted to go around, since I was still biking.

Unfortunately Jane decided to don't move and instead, take her time and pick up her bike and start placing it exactly on the path in between the trees in front of me.  She expected that I was going to stop, wait for her to get up, mount her bike in front of me and then hit the brakes and keep on blocking me from going the speed that I wanted to. There goes to the garbage pretty much rule 1 to let the faster rider go and rule 2 to give right of way for the person that is actually still biking. I got frustrated at this point and told her “Jane this is BS!” . I refused to play this game any longer and went around and biked away…

Single track was so much faster for me now. I got to the opening and didn’t see Jane anywhere; I knew that with her acceleration she could be on my wheel on those fast sections. I went to the next single track and had an awesome smooth sail there, next opening and still nothing, than I got to the final and very small, bumpy and twisty trail where top Florida racer Bob McCarty caught up with me.
﻿﻿ 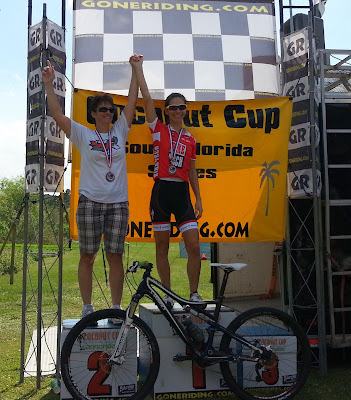 Seconds later we headed out to the final grassy stretch that lead to the finish lane. I had my team mate Jen yelling to me “Finish strong!” and I stood up one last time and pushed to the finish. In those last 1.5 miles I was able to gain a whole 30 seconds on Jane. I was so happy I was done; I was so happy that thankfully I was able to defend my title today after a series of wins during this biking season. Funny enough that you never know how your race is going to unfold and when you expect a more relaxed day because of lack in numbers from the competition, all you need however is one strong and stubborn opponent to have a long and exhausting race and to be pushed to the limits… 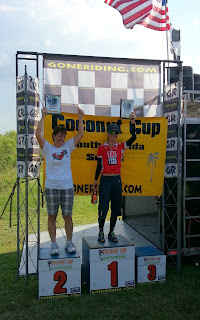 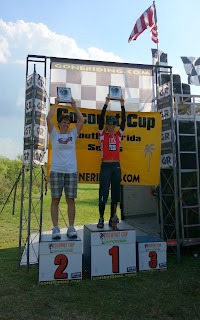 After the race I took a cool shower, yeah at the bike wash station! It felt so good and the water was so cold; it was a well needed cool down. Changed to fresh gear and waited around for overall awards. We got some home-made food prepared by Terry from Gone Riding and spent a good time chatting with friends. 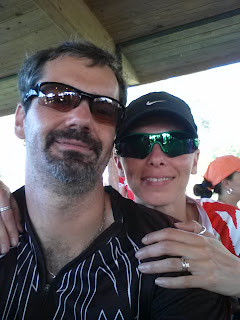 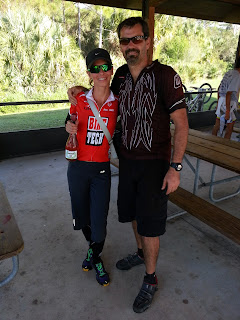 It was awesome to get second year in a row South Florida Champ title and I brought with me shirt from my previous year win. Today also was mine and my husband’s 12 year wedding anniversary and I was glad I could bring the win home for that occasion and make my husband proud. We had a great day overall and on the end of it we looked like lobsters from the beating of the Florida sun. 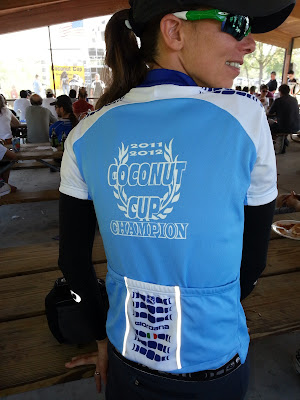 We finished the day with cool photo-shoot of our crew from Bike Tech Miami.
﻿ 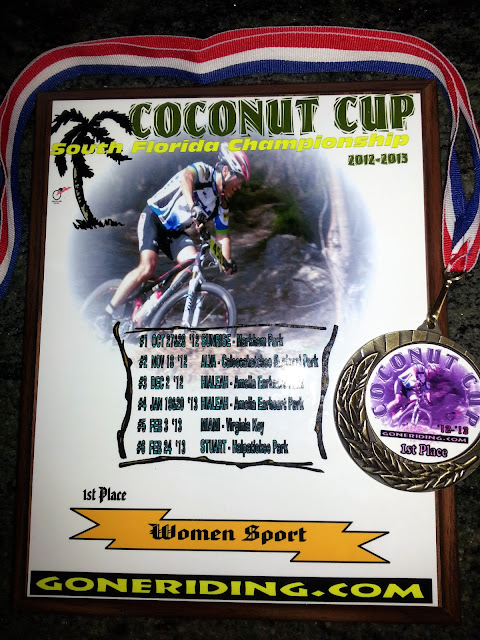