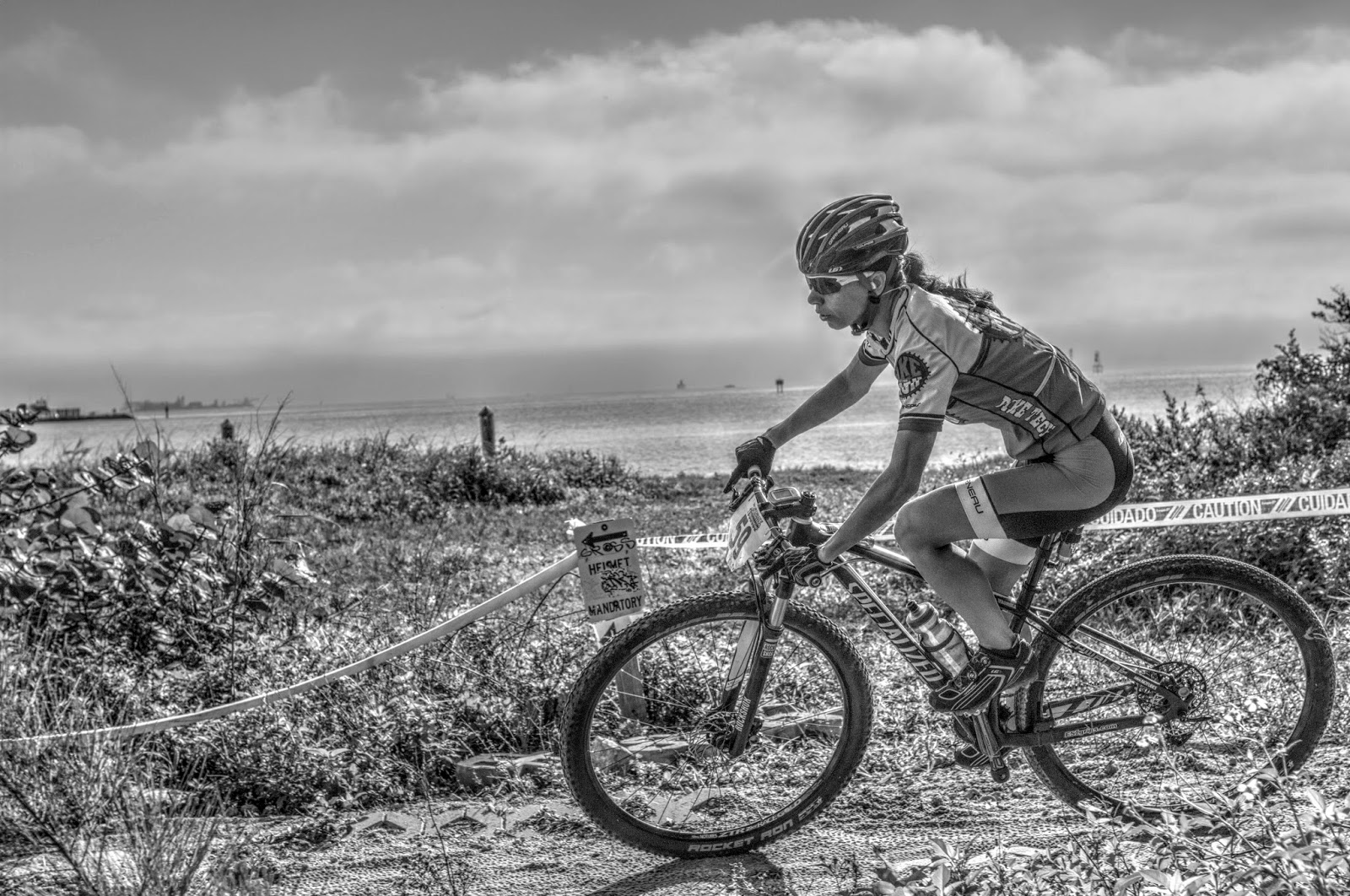 For the first time we raced here a year ago and the race was a total hit.

Naturally I was looking forward coming back to Key Biscayne Park for the same experience. I had a great time than and was duking it out with my main competitor for the series Jane and I did great and won after all. 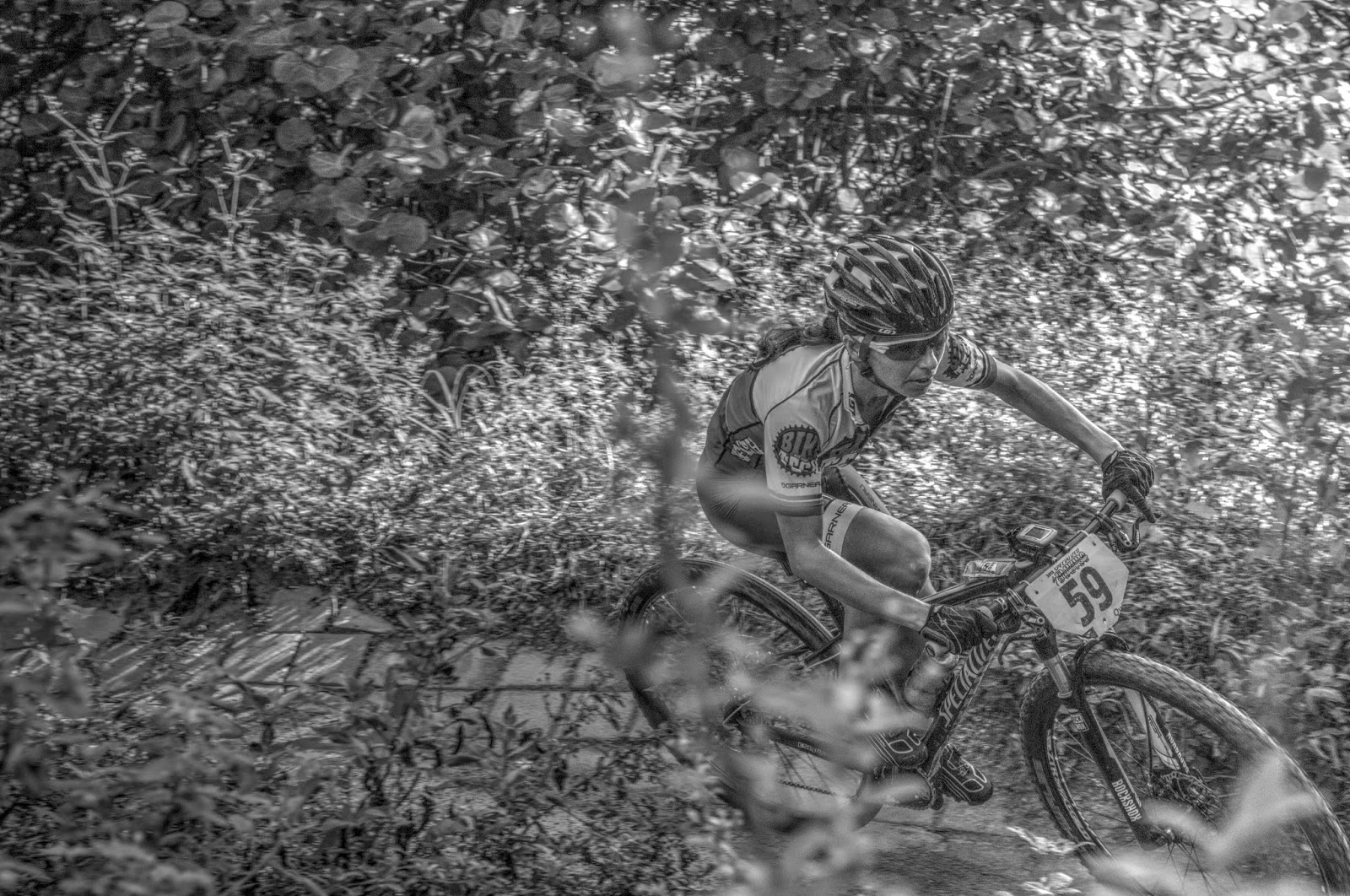 I was wondering however if I would be able to recreate this feeling during our race this time around especially after my last two races not being as good as I would love them to be. 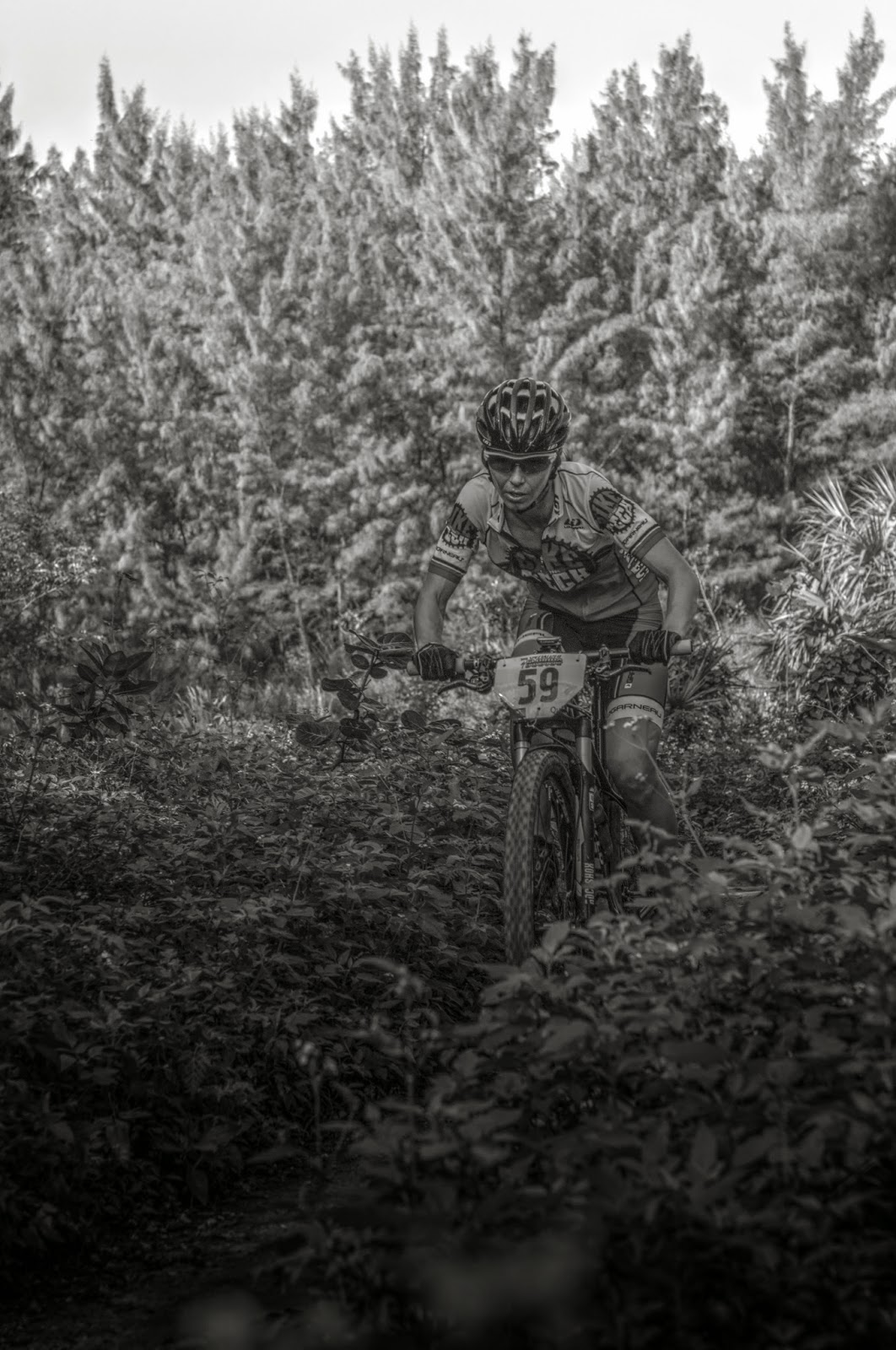 My knee was still bothering me a little but not terribly and I was more rested than before but still very far from total freshness.  I was ready however to have a good time and put some solid work to proof to myself that I have it in me and that I can ride fast...

The weather was perfect; maybe a little on the warm side since the temps were in the 80s and it is the beginning of February! But it looked as it rained a little overnight and it made the trails nicely packed and only slippery in one tiny section, the rest was a blast to ride on…

On the start the race director gave us ladies the opportunity to vote on how many laps we wanted to ride.


Recently we are racing three laps but since those laps were a little shorter than usual we had a choice. I voted for four, since I think the endurance ride suits me more than a sprint and also I am going to race here on the same track in an off road triathlon just next week. So more was merrier for me even though I knew we were all going to get tortured quite a lot from all those miles! 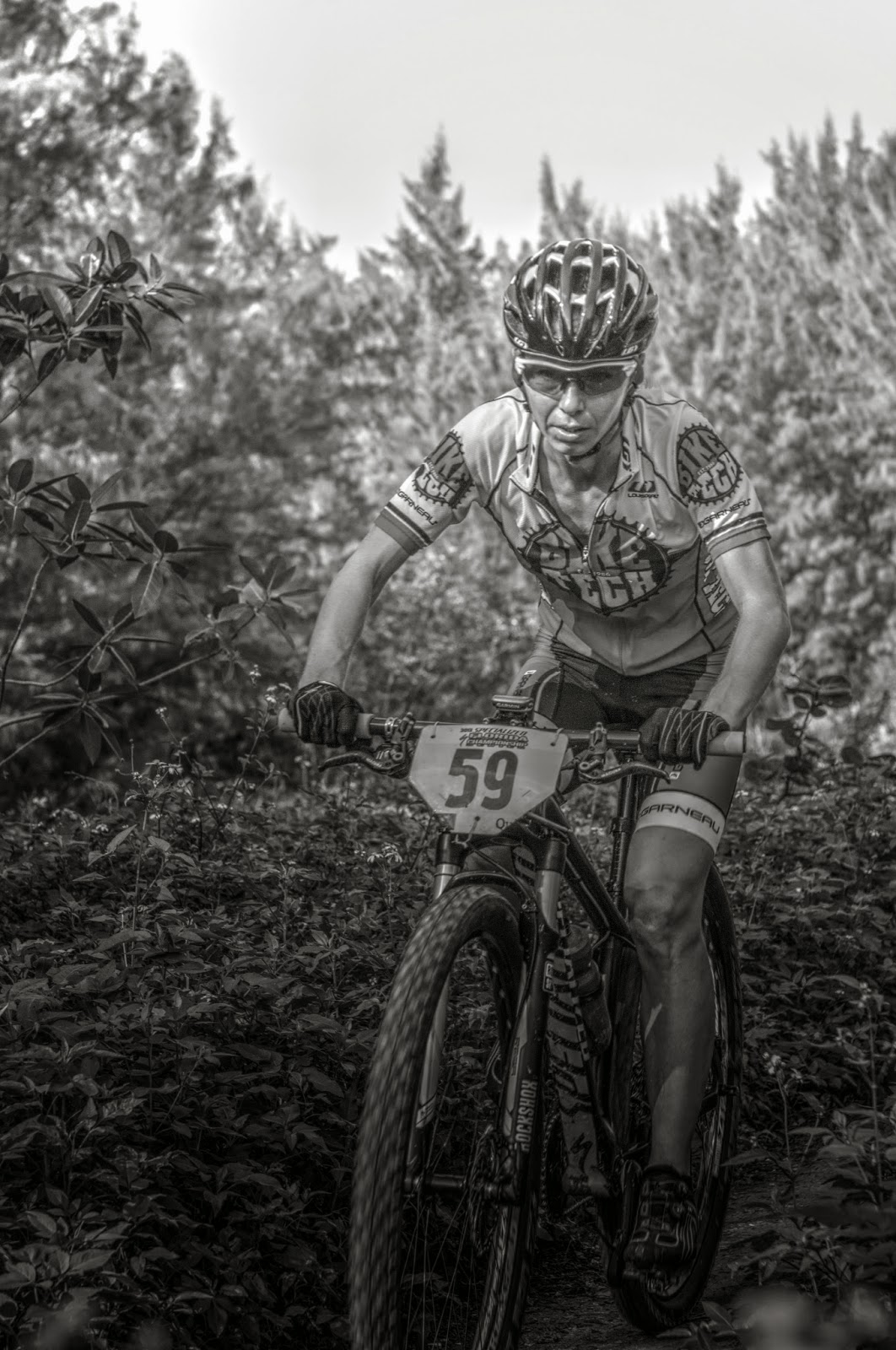 And the course is not easy and not easy at all when you go hard and even tougher when you go hard for the whole four laps. All the never ending climbs, berms, jet stream like passes and manmade obstacles made the course very taxing. There were no opportunities to relax, especially when what is on the clock matters to you.

When we took off and were about to reach the gate into the trails it was a total chaos, no matter what line you were trying to pick carefully on the pre-ride, in a split second I found out it was not going to happen. We were all over the place, scrambling for position and all the lines were totally lost.


When we finally reached the trail system we were all together. Usually the start is so intense that I will hang there for a short while and with each passing minute keep falling back. But it didn’t happen this time. 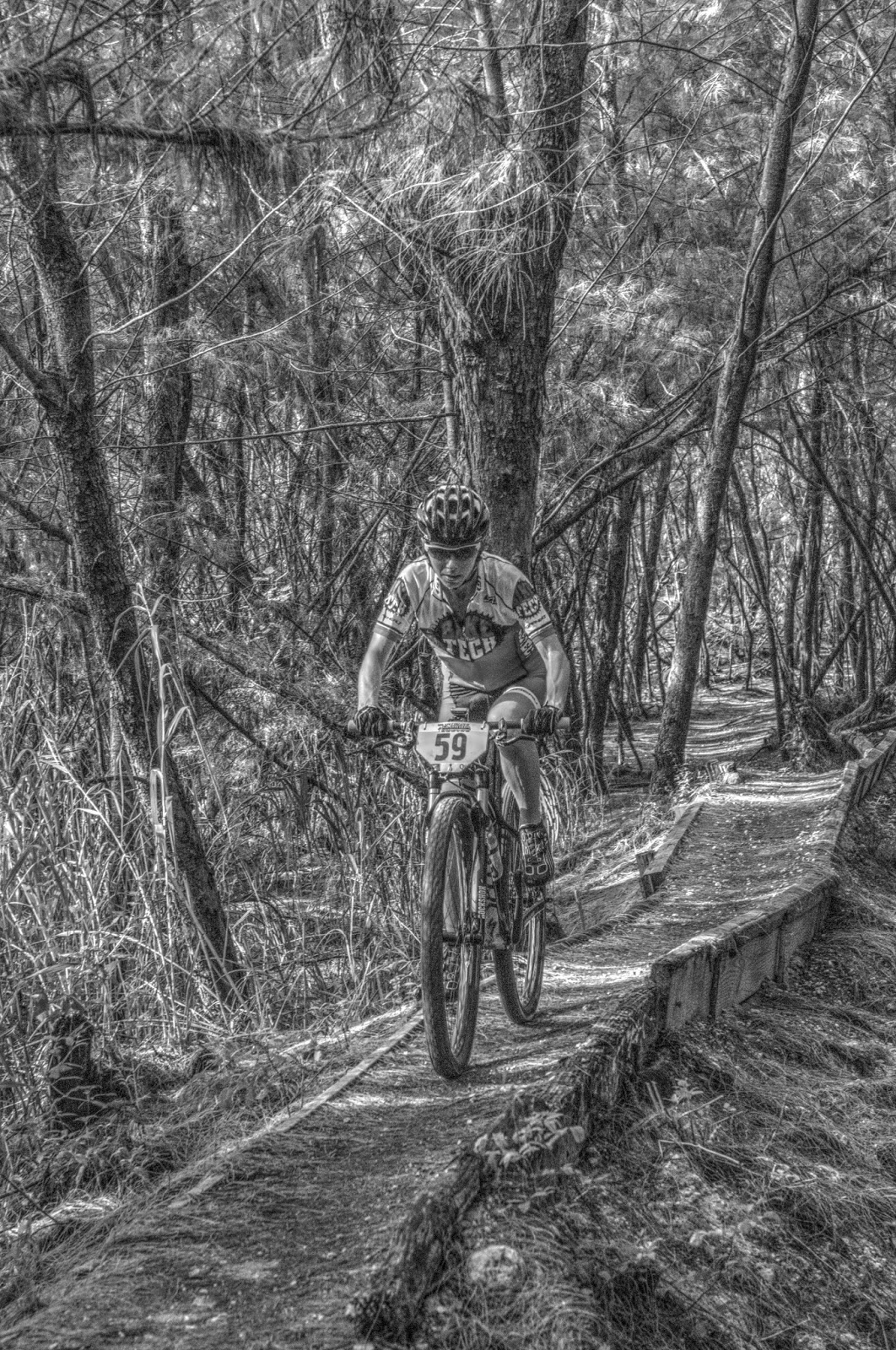 I stayed nicely with the ladies in a beautiful parade throughout the whole climb section and into the first slippery, bumpy and more technical trail. Jen was leading and encouraging us to keep on pushing; Duffy was second, than Kathy and Me. The moment we entered the wet section things slowed down a bit. We were wheel to wheel waiting, almost doing a truck trying not to hit each other and were hoping to get out of this section as quick as possible.

It didn't last for that long thankfully until we finally got out to the wide gravel uphill path. Duffy sped up and so did I and I pushed and went to the left to make a pass and jetted into the next trail system. 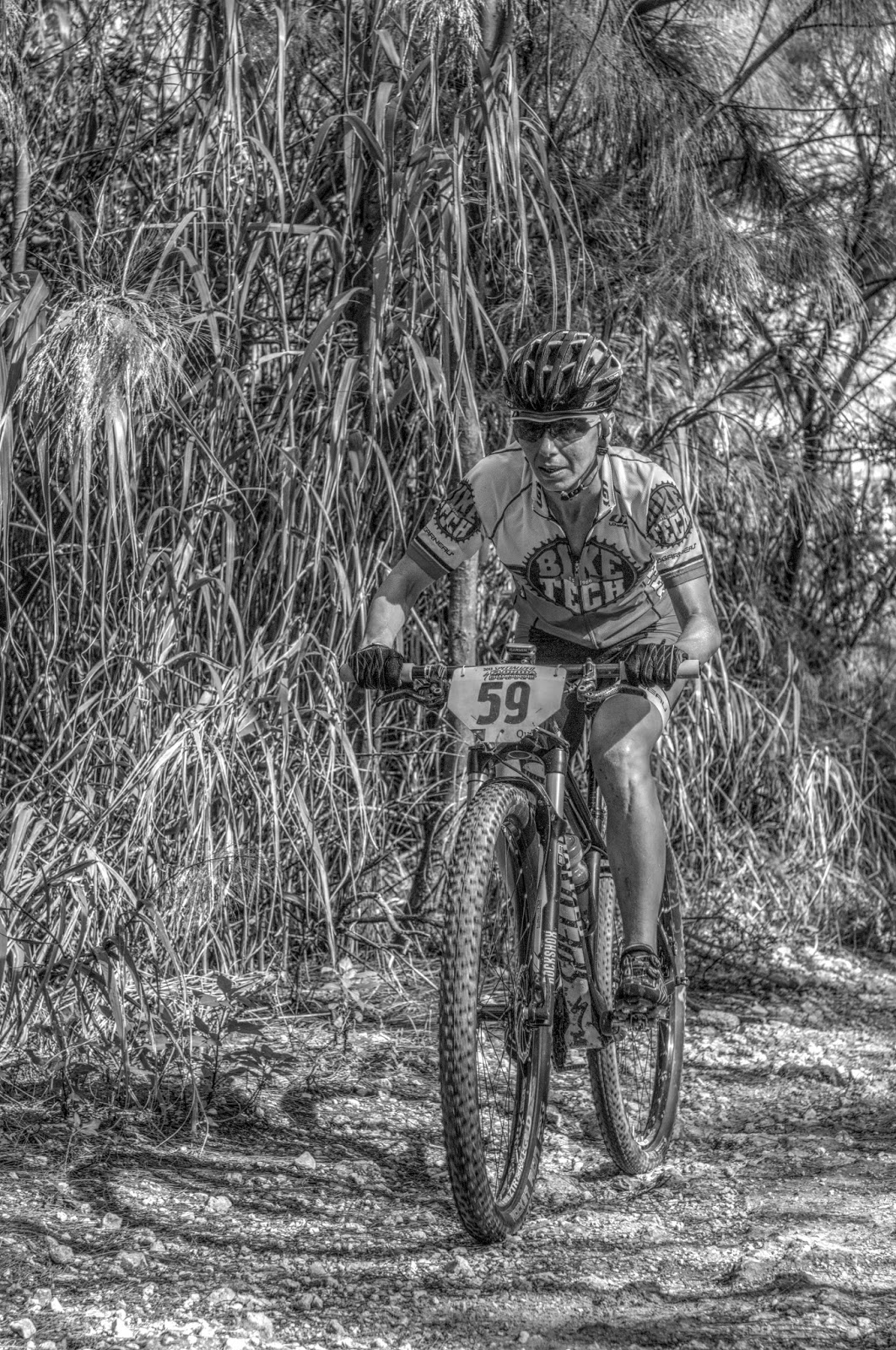 Throughout this first intense lap I stayed quite close to the leaders and had them in sight most of the time, being only toward the end of the lap some 20 and 30 seconds behind. The riding was so fast and so exhausting that the whole first lap I was completely redlining, and totally by my own choice. I guess I just wanted to feel again this incredible burn in the whole body which tells you that you are definitely living on the edge and giving what you got. And even though I tried to stay as close as I could throughout the race to the other riders, shortly after the first lap my main goal was not to get a heart attack and not puke.  Little later I found out that the latter was exactly what happened to Duffy after the second lap. My face felt like it was burning out from inside out, it was suddenly hot. Thankfully it seemed like everyone had to take a step back of the pace slightly and relaxed on the second lap and throughout the remainder of the race. But only by one minute per 6 mile lap, we still were flying.


Going next to a sick setup with monster speaker’s right in the middle of the forest and having music blasting in our ears when you are wondering how much longer before you pass out didn’t help. It was awesome, and I made sure I had a little energy left to put a smile and say quickly Hi to the volunteers, but the energy there made you go even faster, way faster than you would otherwise! 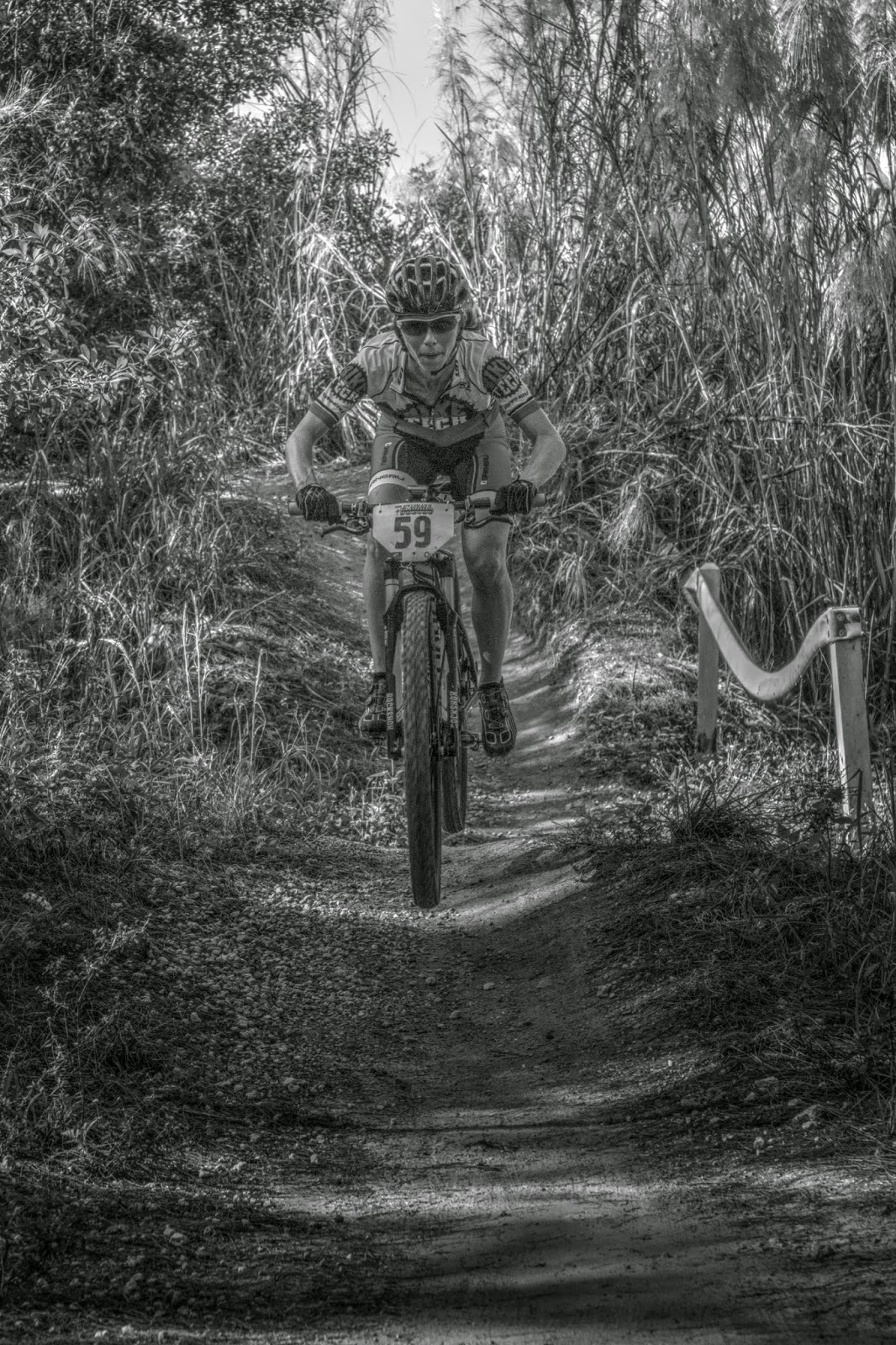 I thought to myself that this race is like a “heart attack burger”, it is so bad but so good!

So bad because off the intense effort we were putting out there but so good, because we were flying like little stealth bombers and were diving into fast drops and twisty trails at full speed like there was no tomorrow.

It was this huge red ON button that never went away, no matter what trail system you were on. You push on the climbs, push through the turns, and push on the straightaways. No second to slow down, and trust me I had split seconds where your body just goes for a tiny moment to this cozy feeling and it wants to slow down and to feel comfortable and the moment you start to realize how good it feels your brain puts back the red ON button and you make yourself push even harder. It hurts and strips all logic and common sense away! You suffer but also there is so much pleasure with going downhill and into the jump and turn so fast that you barley stay in the trail. All I thought of at those sections was that the feeling made me think I was flying a fighter jet which by the way I always dreamed about flying one day. 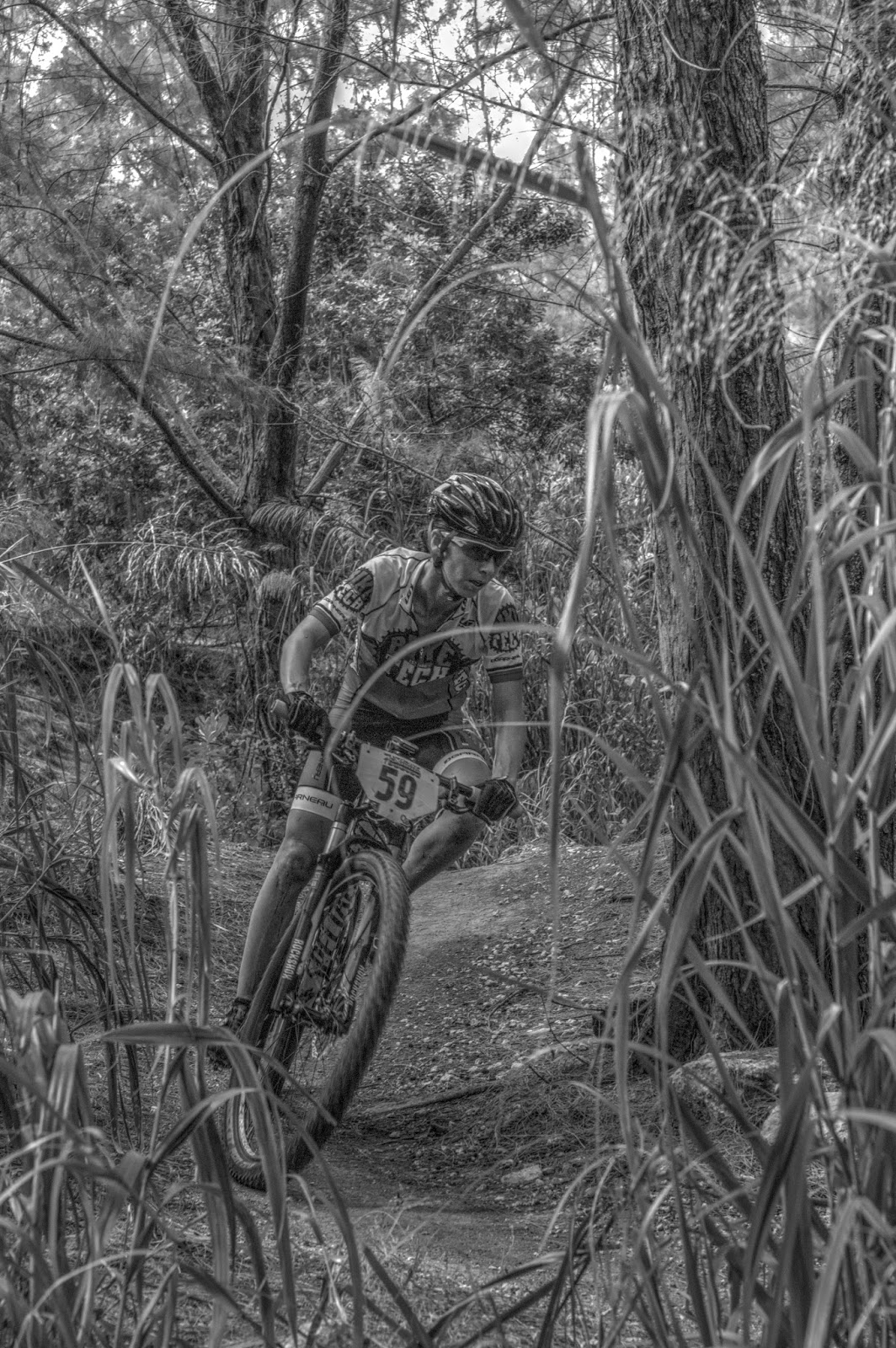 You would think I’m a little adrenaline junky, and maybe yes, part of me definitely is, while the other is a little scaredy cat. But somehow this combo works and makes me do what I love to do and keeps me safe.

My second, third and fourth lap stayed very consistent and actually each one was progressively faster.
On the final lap I could see Kathy still not that far in front coming out when I was coming in to a small trail system.

After all I finished 3rd with a minute back to the 2nd and 3.5 to the first which was not bad at all. The most satisfying part of my race was that I allowed myself to take on the challenge, push hard, keep strong, and at the same time absorb the moment, energy  and joy of racing my amazing bike at high speeds. 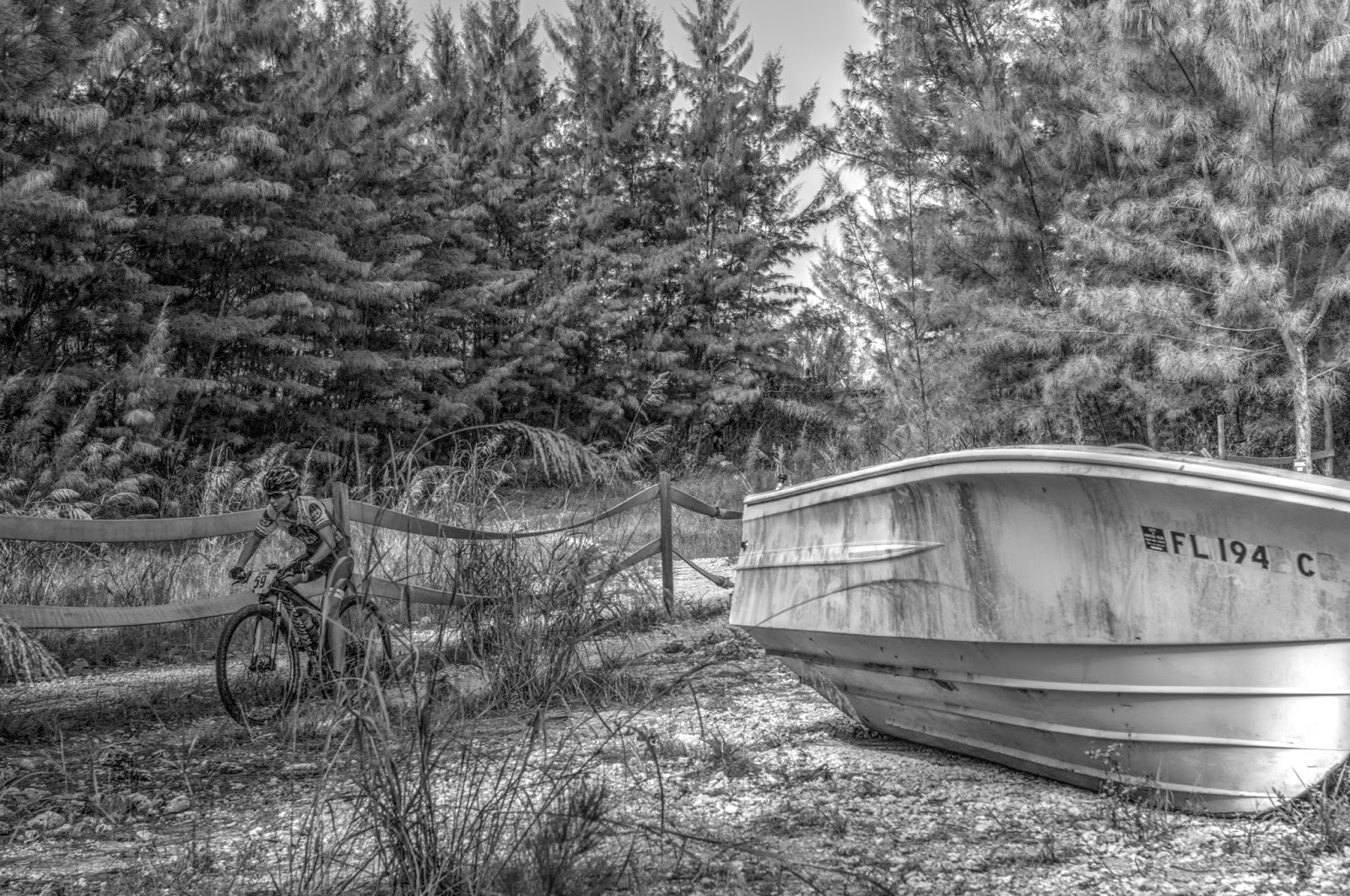 My husband like usual was cheering for the whole 1:45hrs that we raced and was very happy to see me finally riding the way I should. Like always I was grateful for all the supporting friends and team-mates, race organizers and volunteers! 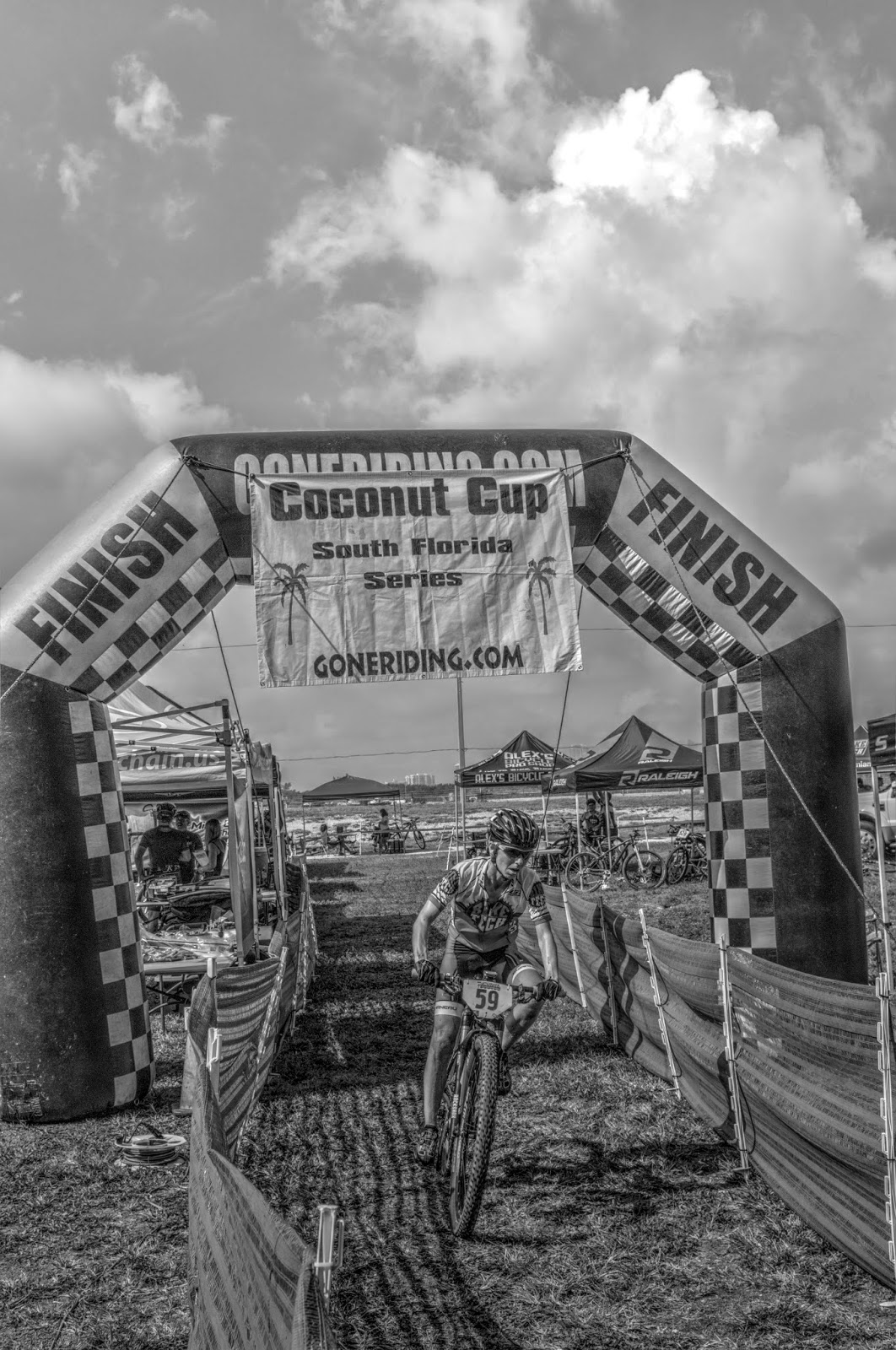 On the side note of the podium picture ~ 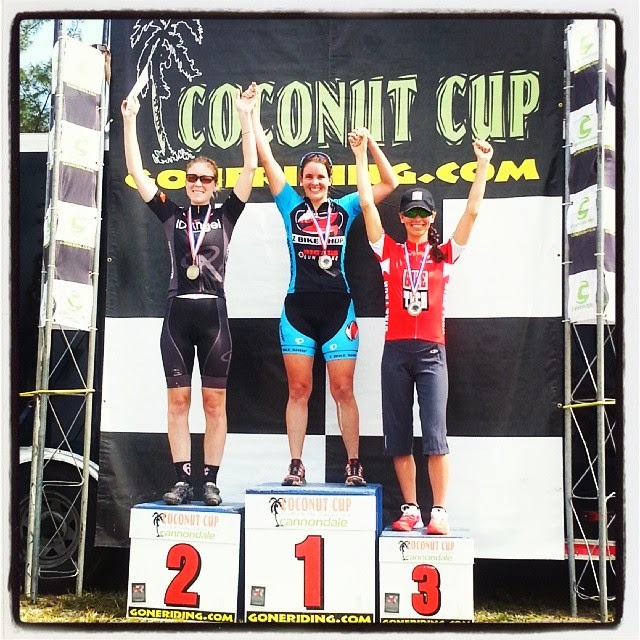 It was two years back during the race in Oleta River Park in Miami where I won my race for the first time in the Base Women Class and was so ecstatic. Later on there was also another podium presentation for the Pro/Expert Women that were a whole two classes up and where my friend Jen asked me to go with her just for the fun of it and to keep her company since there were no other ladies to share this podium with her. I was apprehensive but said sure it should not hurt. But the moment I stepped on the box right next to her I felt uncomfortable in an instant and wondered what I was doing there. After getting away as fast as I could I told Jen how bad I felt and that I would never do such a thing again, well unless I race in the same class and actually deserve to be there. I knew that it was close to impossible to make it happen one day but…

But you never know what life has in the cards for you and today, a whole two years later and two whole classes up, after two years of hard training and dedication I was there, for the second time, standing right by her side once more and holding hands just as we did in the past.

This time however I felt like I did belong there...

And the best part of all these races, even if they are muddy or dry, when I am done with the race I can just pick up my favorite ProGold product and make my bike clean again. Whether it be the powerful blast off degreaser for my derailleur or cassette when it really gets dirty or the Pro Towels to make the bike shiny again, I know there is a ProGold product for the job… The best thing I like to do after a race is I hang my bike up and soak it with water then I spray ProGold Bike Wash on the entire bike(Carbon friendly) and wait 5 minutes and then just wash it off. It is as simple as that… Once dry lube the chain with their chain lube and you ready to race another day…


Monster Thank You to my Husband Pax for the incredible pictures today!!!

Of course my life is easier, my bike is faster my body is stronger and my dreams are possible because of all my amazing Sponsors: