Reflection on the 2016 Season and Plans on what comes next...


2016 was a pretty interesting season and it unfolded to be one of the best yet as far as biking goes.

At first however the plans were completely different, therefore there were moments of split roads and I had to decide where I wanted to go.

It started with the strong belief that it should be my year for XTERRA racing. Quickly I hired the best coach out there and was finally set to do things right. Until that moment I was a self-coached athlete and was wondering if there were possibly things out there that I was missing out on and felt the structure and knowledge of the coach would help.

As we know I have been for the past 9 years just torn apart between mountain biking and off road triathlon. My love for both kept me reaching to both buckets but the way one could never be completely full. It was this painful tradeoff which still keeps on going when it’s tough for me to commit to be a full-time triathlete since I love biking so much, but also so difficult to be a full-time biker since there are those raw elements in the off-road triathlon that makes me want more. The feeling of racing your bike after an exhausting swim when you are still dripping in water, doing a full bike race and still getting on the really down and dirty run just brings those most primal elements and feelings that it is so difficult to let go of that. Plus, being in two sports eats so much more energy, we all know triathlon training is just plain exhausting. And when my biking friends hop on the bike 6 times a week or more I hope to get soreness out of my legs and tiredness after my swim out of my body so I can find some energy for the bike workout. The body simply gets drained and you cannot accomplish everything, it’s one or the other.

So, I did it, I said I’m committing, I started training like a triathlete for first time in my life under professional watch. I swam as much as usual just in a different structure, but I ran so much more than I could have imagined, I noticed improvements pretty quickly but it was all at a high cost. My feet were hurting and my body was really tired, my biking time was reduced greatly to the point of me riding half of what I used to. I never felt stronger on my run before but I had no energy for any quality bike workouts. I noticed how quickly and badly it was sliding. The most bellowed discipline of mine started sliding in between my fingers and vanishing in front of my eyes… I was sad and knew I cannot do this for long, my stubbornness set me on the goal that I had in my mind for the longest time but my heart was telling me otherwise. That my hopes for committing myself fully to biking were always pushed back for one more and another season. This way months and years went by. I started realizing that my dreams of biking more and what I want from this sport might never happen of me pushing it away from myself further and further. Every time I had to make this decision it hurt me more and more. And every time I tried to accomplish what I wanted in triathlon, I was a little closer but still not close enough. I wonder if am I going to sacrifice what I really love for what stubborn mind wants to finish and will not stop until it happens? Six months into the triathlon training did come a reality check for me. 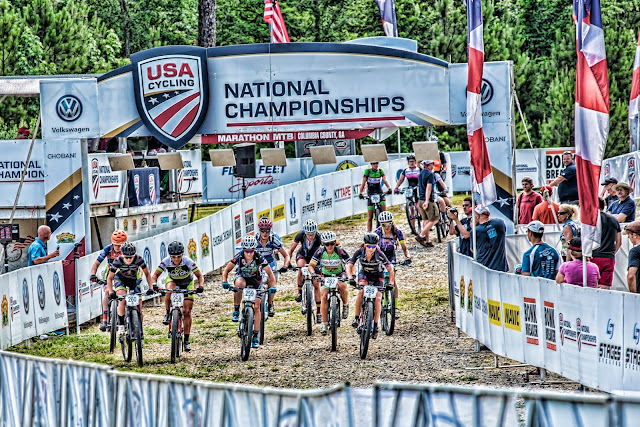 After speaking to some of my friends and my husband we had to make the painful decision to where we go from there. All of the sudden I decided I didn’t want to run that much anymore and wanted to feel again how awesome it is to be a biker, even if for a short little while. It was already June.
From whatever I had in me from the training this year had to be enough for me to compete in the matter of days in the Marathon Mountain Bike Nationals in Georgia. 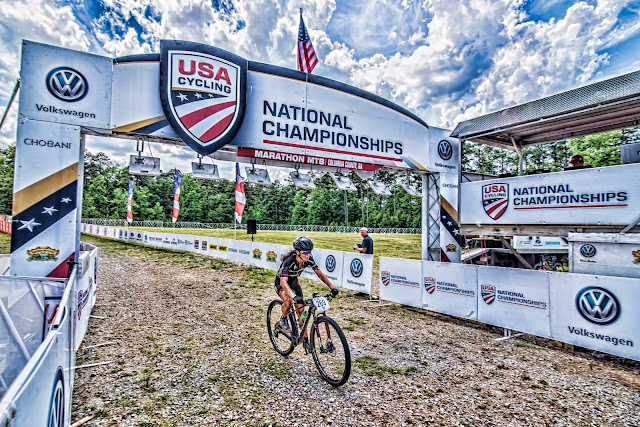 I was set for a win even though my preparations were not there. Missing first place after my incredible and exciting race last year was a big void that I had to fill this year. After leading for 47 miles I ended up placing 2nd, it did sting and I knew I will be even more focused this time. Racing that long is more about how you attack it mentally than physically, plus my triathlon training I feel gives me endurance and this mental strength that is much needed for longer events. I started hard and never gave up. I battled and held my lead for most of the race and finally got my first even stars and stripes jersey in a mountain biking event. It was awesome and I realized how happy this made me. 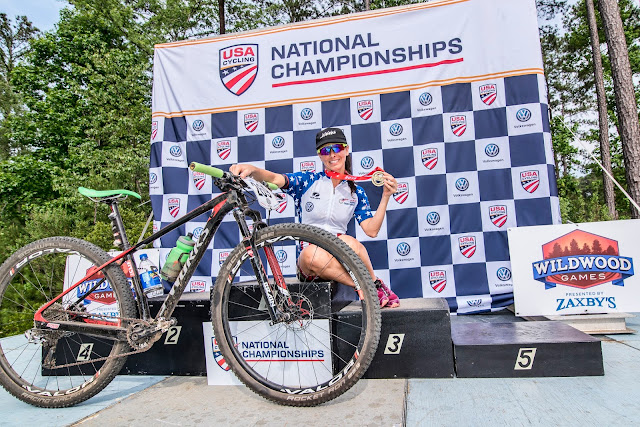 Few weeks later the calendar showed the Cross-Country Nationals this time all the way in Mammoth, California.

I was very skeptical and lots of riders advised me not to bother because of altitude. Everyone who went there last year had some kind of mishap and didn’t race well, most decided not to come back. At first I was not planning for it but after speaking with my husband and feeling that I might have a good chance even with the fact the race was at altitude we decided to go. I had a few weeks to focus on the bike training only and it felt awesome, in the matter of four weeks I was able to progress so much. I was quickly not only becoming the same rider I used to be but even better. Finally, I was able to complete workouts I could not touch on my triathlon plan and I was bumping up my levels and feeling so good. I could not imagine how amazing it would have been if I did that all the time, like my biking only competition does. I so wanted to be just a biker.

We flew to California, had a brilliant time and I raced really well. The thin air for sure slowed me down and took so much out of me especially on the long climbs. I had a strong group and was happy I did so well among strong riders. I ended up second to an Xterra Pro who lives at altitude. What an amazing coincidence and amazing athlete to race against, I was happy I beat another pro biker who placed 3rd. 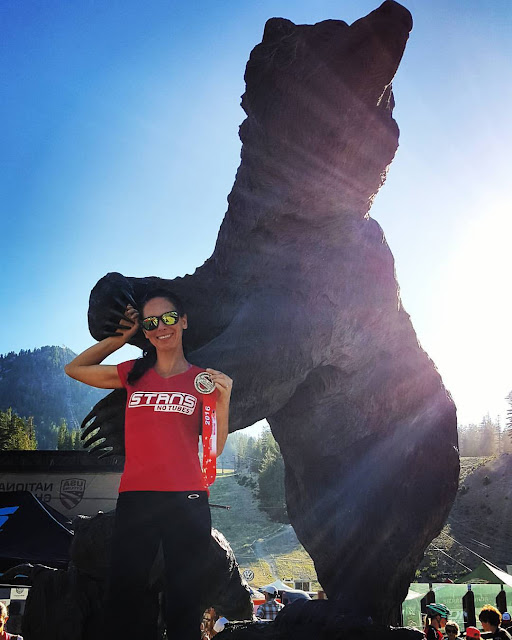 So, next on the list were Worlds. It didn’t even cross my mind earlier that I would be actually seriously entertaining the idea to do so and go to Val Di Sole, Italy to race, but, I was already on a pretty good streak, training finally was going well and I had another few weeks for another training block. We decided to go, the training went well and my body adapted so quickly once again with even more gains. 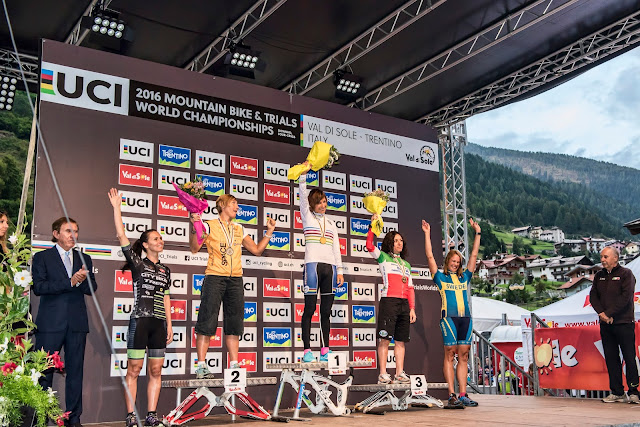 I ended up racing in Italy against the best people in the world, Italian National Champions and 2-time Olympic medalists and 3-time World Champions. It was pretty insane to have an opportunity to do so. The race course was something else, nothing we race here locally. Short but super hard laps, it was the biggest effort I ever gave in the shortest race I ever did. It was so much pain and so much beauty in the whole experience. The most emotional award ceremony for my 4th place finish. Something for sure to remember and be very grateful for. It was sad to come home so quickly and Italy was something we will keep in our hearts for a long time. 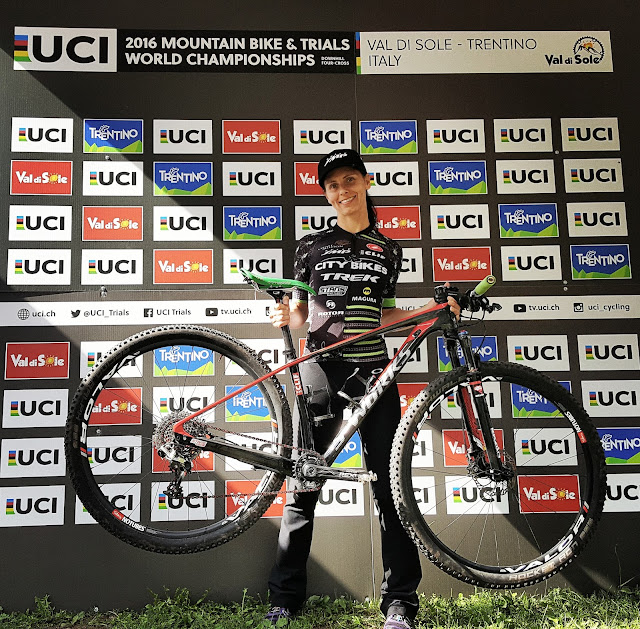 I had nothing else planned now and felt pretty accomplished. Out of no were the idea came out to go for the endurance bike race to defend the Open Women title from last year for Fool’s Gold. I was too tired for it since it was just a week after Italy and I didn’t feel ready. I still managed a decent race and place 3rd. 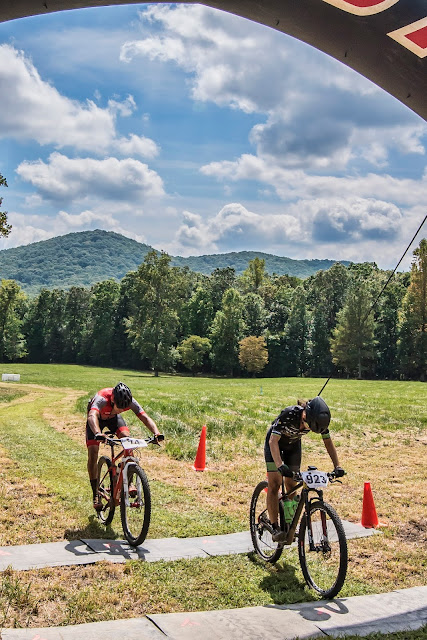 Now I was completely done. After a little rest, I wanted to jump in to some local races of our Florida State Series and I for sure did. But something was really off, my mind and body were so tired that I had no desire or energy to race. For some two weeks or so my universe turned dark, it was so gloomy that I didn’t know what to make out of it. Those were the hardest two weeks in my whole year. I had no idea what I wanted next, and at that moment I really wanted nothing, I felt empty. Thinking ahead and wondering about the next season was even worse since I felt this season although so successful was a big mismatch and energy was put in all the wrong places. How I did get out all of it on top I don’t know but for sure I am grateful.

I ended up getting out more and more to my local races and especially those in my favorite parks since I felt like I wanted to be there and experience riding there and also wanted to see all my friends. It started really rough and it was more of the riding than racing but I kept at it. Eventually completely unplanned, unprepared and uncalled for I ended up finishing the whole series. But it was a good thing, it kept me busy, kept me riding and did clear somewhat my mind.

Now I was becoming myself again and could see what I wanted from the new 2017 season better. Interestingly enough the same dilemma popped instantly. Am I going to be a biker or a triathlete this year? Am I going to pick the wrong discipline and regret once more that I didn’t chose the other? Where do I go from now to achieve all I want without sacrificing what I love? It seemed tricky at first but with time it become more and more clear of what I wanted. I knew that I was still not ready to clear my mind off the triathlon goals but also, I was not going to sacrifice my biking for it too. I was really happy with the decision and now I’m trying to once again to live with it. It’s never easy but it is so difficult in life to accomplish all one wants.

Huge Thanks to all my sponsors and new ones for 2017