After returning home from Richmond, very tired of course I noticed nice surprise in the garden waiting for me! Of course, there is always something happening there, what else I would expect.

In the small flower bed that I created with one native host vine, there was tons of beautiful white caterpillars. They were already very big and had probably one or two more days of chewing left before they will transform into chrysalis and after that to beautiful Zebra Longwing butterflies. Problem was the vine was almost gone and I felt more than obligated (since they were in my garden!) to help little guys out. I and my husband put an effort to bring those hungry babies tons of fresh food. The moment I attached fresh leafs to the old vine stems everyone migrated... :-)

I even had to bring them home for one day since they were spraying our roof with some chemicals. They did behave nicely except one that was ready to transform. He kept venturing away and we did put him on small potted lily like plant that I like to place my "ready" caterpillars on to start working on their chrysalis.

Little guy kept falling and falling to the carpet and the moment we allowed him to just do his own thing, he very independently walked the carpet, found one leaf that was touching it and climbed back up. He picked his favorite spot and after making nice silky patch to attach himself to he hang down to shed his last layer off and become chrysalis. The next day when everyone was back outside happy on the patio it seemed like everyone was ready to go. So I put one by one on the same plant and all caterpillars had their own personal space to transform. I have 14 of them right now hanging down, looking like little owls...
Few of them that I was not able to watch after, I left in close proximity to my other potted tree and all of them migrated straight from the vine to it and there is a group of them hanging right there also. My patio looks now like its Christmas with all those little guys hanging like some ornaments from my plants. They have approximately some 8 to 11 days in the chrysalis form before they emerge as gorgeous butterflies. We had first one born yesterday in the garden and I'm going to update shortly her "snow white" picture...

It's amazing what few feet by few feet of natural space can do. Nature itself is like a miracle. My garden right now is covered in clouds of butterflies and there will be 14 more shortly to add to it. One of them happened to also be a different type of butterfly "spiky" Gulf Fritillary and I also have two tiny Monarch caterpillars feeding on the milkweed. To add to it I discovered another butch of eggs of zebras and put already brand new plants next to them so little guys don't go hungry! More soon... 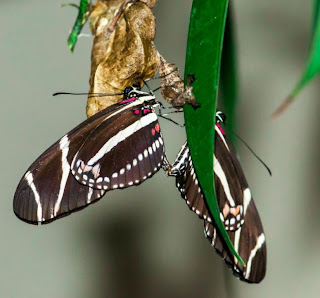 well and mating already. This is the zebra's way. 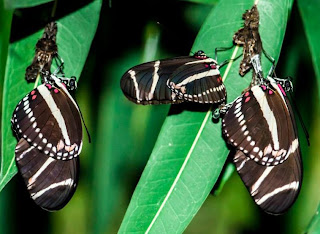