This is the race that I was looking forward to. It’s my home course; it is pretty much right now my favorite park to ride in that is in relatively close proximity to home. Also last time I raced the series here was a whole two years ago. That’s a long time… 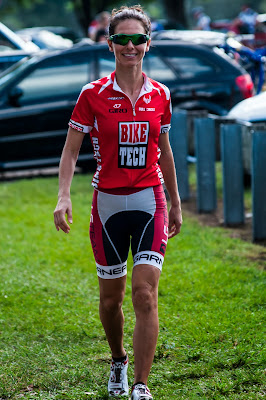 I missed last year’s race for my Xterra World Championship race in Maui and this year not being there but being here gave me some mixed feelings. I was happy but at the same time I felt I was missing something too. We just can’t be in two different places at the same time, unfortunately…


Another reason for making racing in this park special maybe not for best of the reasons is that almost exactly four years ago right in this park on the same course, on my husband’s birthday during a training ride I broke both of my arms. This crash and injury took me away from biking for almost a full year and I never knew during this time if I will ever be able to bike again...


But here I am, a little wiser, even more excited than in the past, much stronger and ready for this great race.

When I saw the course setup I was lost for words.  I didn’t feel it, nor understand it, it had no flow to it and felt like stop and go on the loop. 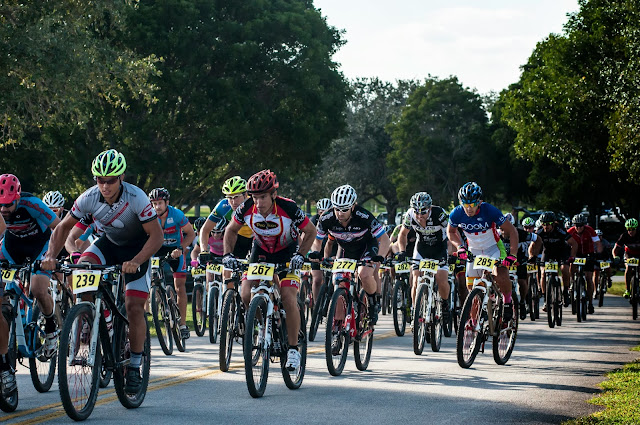 The trails that I knew were running in the opposite direction and were only partially included, so every corner, every rock every root was in a different place now, to make it more interesting there were new fresh connecting paths carved out that would take you suddenly from one trail to the other in the most unexpected places. I wondered sometimes if I was still in the same park. I would say here goes this one time a year possible home advantage for South Florida racers while other courses remain mostly the same for each race. That was a bummer and after riding it just partially for the second time I felt slightly better about it but still not too happy. 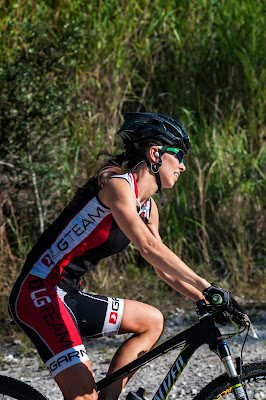 On the good note I had a great time being able to pre-ride the course with a bunch of friends including some fast ladies like Stefi, Candace, Josselyn, also my husband Pax, Wally and Dave and this was probably the highlight of the day.

Either way I had a short track race starting very soon and had to get ready. Yellow wave went off second and we were set for some 24-25 minutes of suffering on the not technical one mile loop around the lake. First part was relatively wide and good for passing while second half was in the smooth single-track. I was expecting it to be way more brutal than it actually was, this was based on what I experienced here two years ago on the same course. I felt better today and was able to stay around other ladies for the whole time. I was in 2nd position for most of the race and finished as such only 10 seconds behind the leader. 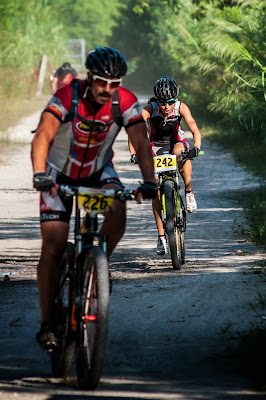 Since it is a local park I had my aunt, her husband and kiddos Natie and Matthew visit me during the race. Mathew, 10 years of age after seeing my short track race decided to give it a try in the Kids Race the next morning.:)

I watched and encouraged him all the way during the Sunday’s race to the finish and can only hope he will take his first race away as a positive experience.


During my XC race on Sunday I felt weird. I knew that I could and should go faster but it was just not happening. I couldn’t make sense out of it. Was it the course setup? Maybe my sore legs from running for two days prior to this race that I was excited to finally do after long months of foot pain that kept my running very scarce? 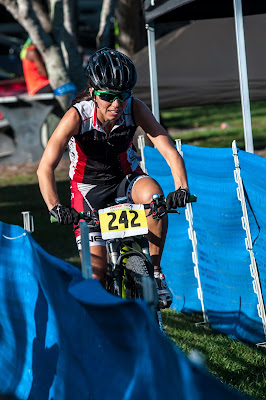 Maybe it was me trying to race with a water bottle for the first time in the short race instead of camelback? I don’t know, but the moment we got to the single-track it only took one mile for my bike to wash out from under me on the freshly carved soft corner and fall flat on my hip. Apparently right there I lost my cadence sensor. Just minutes after that I made wrong turn and almost ran into the yellow tape. I did it three more times later on in the race. It’s was so awkward, not only you are running some part of the trail in the opposite direction and you are looking on already distorted image of the trail you think you knew when suddenly there is a right turn, while at the same time there is new less visible left turn.  I would automatically go to the right and run to the tape again and again, I never did that before in all those years now of me racing bikes. I could not believe it. Whoever set this course up did set me for some frustrating adventure today. I felt and knew that girls just kept getting away further and further. Well since it was my first time with the bottle I missed the handoff on the aid station, therefore I didn’t have a fresh bottle for the whole second lap; simply I had nothing to drink! Than the passing of faster guys kept on going and at times I had to do a truck stand on the narrow edge of the trails high in the sky just to let them by. At one sections I let the three riders go and the moment I resumed my biking I heard this awful, loud, buzz or helicopter like noise. I looked everywhere around and I become obvious that it was coming out from my bike. I didn’t see anything wrong and I stopped, moved all cables around, spun the wheels and for some reasons the noise went away. After I finished I realized what I missed because the other part of the cadence sensor was all displaced and almost stuck in my spokes. 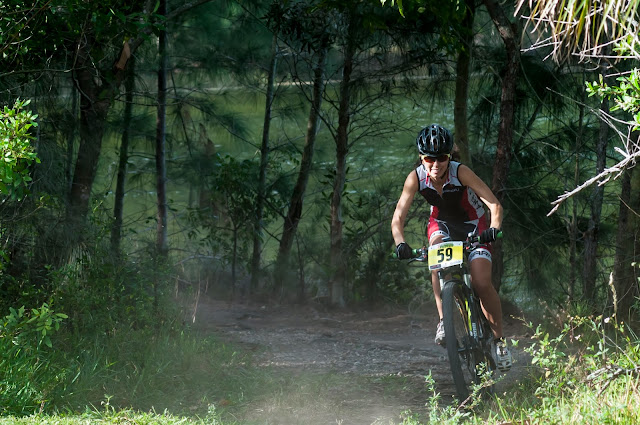 Little later on I almost blew my back tire for the first time also, by hitting a root sticking out in the middle of the turn and looking like a giant frog (I call them dogs).

Not knowing why I felt rested, way to rested on my second lap. I wanted to go faster but I couldn’t. 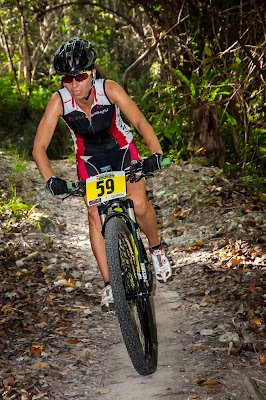 Third lap was full of all the same, but this time I avoided the tapes and wrong turns. Oh yeah, third time is the charm. My speed didn’t improve however and I just tried to enjoy the park as much as I could. Most of the guys passing were super sweet and cooperative and were giving me lots of compliments and were not forcing their way by. I had a good time toward the end riding with single speed buds right behind me who inspired me to push a little bit harder and have a nice and fast last section of the course.


On the finish line I was way behind the top three girls and way ahead of fifth, so not much could have been different here. Being a little closer to the front would be very welcoming, but it was not the day to do so. 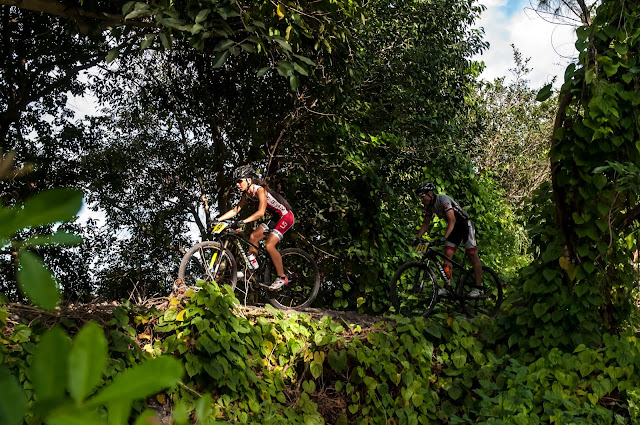 What I enjoyed today was camaraderie, so many amazing people with so much passion for what we do. And it’s not all about winning and snapping all the medals, it is so much more to it. Not everyone can win everything all the time; there are always only a few lucky ones that get to do that. It doesn’t mean that the rest should go home with their head down. I would say it should be way opposite, everyone who raced, finished and had a great time today is victorious in a way. And only us mountain bikers and racers understand how difficult it is what we do and how much work and skill and bravery it takes to be a great mountain biker.
Not that many people get to do what we do, where we are allowed to enjoy life and play tough in the dirt like we never want to grow up.

And we probably don’t want to and will not and that’s all good news... 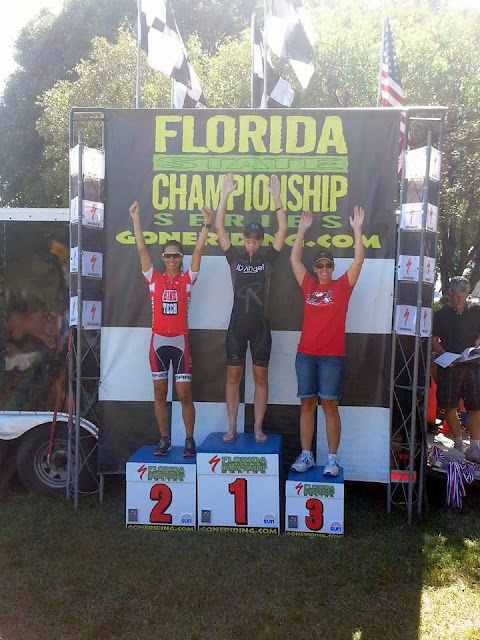 Always big thanks to Bike Tech USA and rest of my amazing support, and especially my husband Pax who goes way beyond anyone could ask for just to make sure I have great time and great race! Thank you, thank you, thank you!