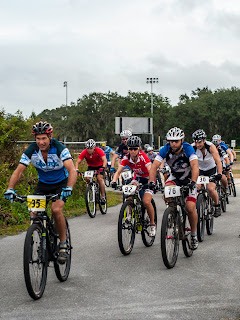 It was a tough two days I must say...

Never got to a race before on that tired of legs. Pulled off a miracle on the short track though.

There was no gas at all during the main race, only pain. I did what I could. Only the third lap felt right, still not stellar but better. Unfortunately for the nature lover in me I got attacked by two small trees, one clipped me on the left shoulder sending me to the one on the right where I jammed my right shoulder full speed. It hurt so bad my scream echoed in the whole forest.

But here is my full story…


Besides the fact that I was looking forward to racing in Lakeland very much so, because of my adoration for the trail system here, which I find fun, challenging and also quite pretty at times, I was not ready. 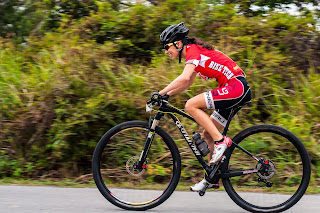 My long week spiraled out of the control and I found myself heading to the race site with cramps in the left hamstring that will last for the whole weekend and totally spent and sore legs. Considering the fact that we were going to have a Short Track race on Saturday and the main race on Sunday made things even worse. 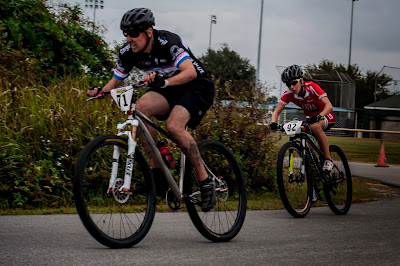 When we arrived in the park it was greyish out and it was drizzling, it didn’t look like lots of people were eager to ride. With time passing by very quickly and the course being a little damp and my body feeling not so hot we didn’t do much of pre-riding. Also the course was somewhat flipped this year and was missing some “fingers” or for the ones who don’t know the park that well, the most technical parts of the trail… ;-) Some fingers were still in but were run in the opposite direction. This part of the course requires some leg power and a strong mind and a bag of skills. I was happy having my Cupcake girl super Zee joining us during the practice, always great company.

After checking out both parts of the course, main and short track we allowed ourselves some time to kick back and absorb the day. I was not in the racing mode and was sitting there just almost numb on the inside. I knew this weekend was not going to be the way I wanted it to be, but I was about to put out there what I can and still try my best. 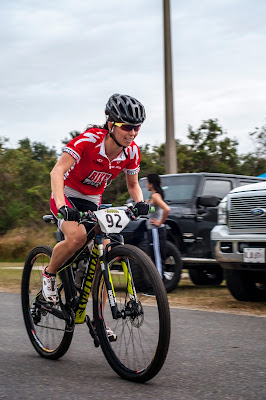 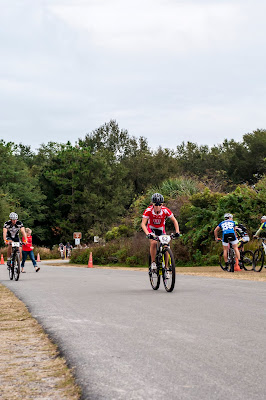 The short track with all the guys and girls bunched up together on the start line somehow worked out pretty well and with few guys zooming by like shooting stars left and right next to my wheels it happened to be intense but a safe start. 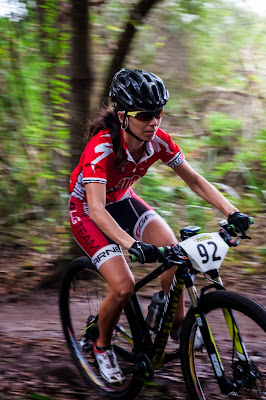 An instant after the first open road and entry to the single-track there was a mass of people doing a track stand and trying to get to the trail. We were all on the same boat and shortly a nice long train of riders formed and we proceeded in a very easy pace through the 0.4 of the mile in the flat and winy trail.  The moment trail opened up however and spilled us back on the open road the whole race energy changed and everyone dispersed and charged. It was intense, super hard all-out effort, now everyone was racing full speed and we had a long time to go. With a loop being little under a mile time was going by quickly however and before you know it you were back on the road making a total U turn to the grass, through the shoot, back to the road and back to the trail and we kept going. 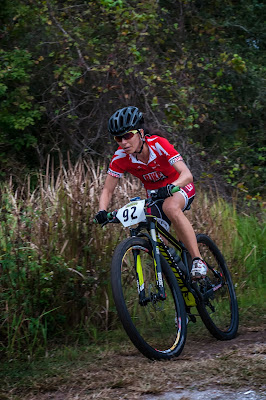 At some point I think on the 4th lap I had Holly tracking me down, knowing that she is a road racer and a little power horse I knew it was going to be an interesting challenge. We went three times on the road in the same section head to head super hard fighting for position to get first to the turn and through the shoot.  With being ready to pass out at any time really I took on the challenge and quite enjoyed it and pushed even harder. On the 5th lap she was able to cut me on the left and be first in the turn, I made through the shoot and was able to regain my lead and follow with it throughout the final lap. Carolyn and Kathy were most of this sprint effort ahead and I knew I was not getting any closer to them today. I was happy. I think I surprised myself and was not completely sure where this energy did come from. I claimed 3rd in open women as a job well done. 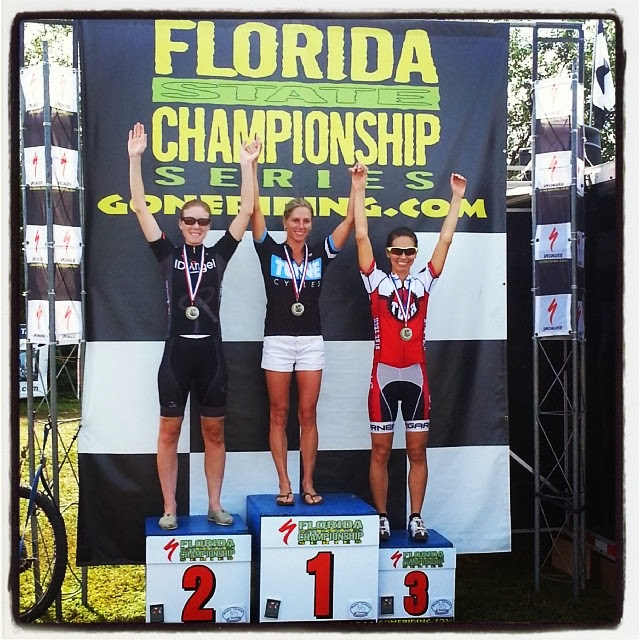 Ladies in the white wave had a similar scenario with Zee and Simone having almost head to head sprints all along looking really mean and bad and super serious. 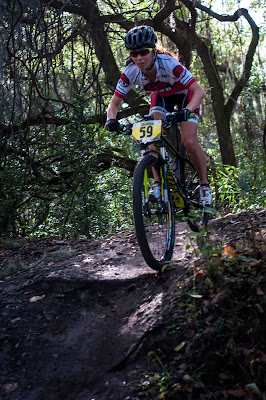 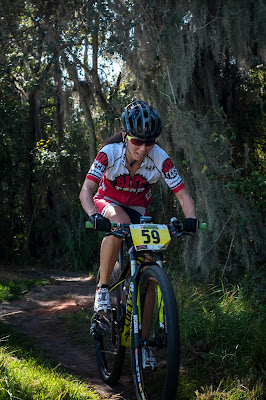 Before the main race on Sunday, I was calm, composed, with a relaxed mind but also so awfully fatigued body. No matter what I tried to do to try to recover before the race, it was not going to work and all damage had been already done. So I got what I got and did line up with it on the start line. 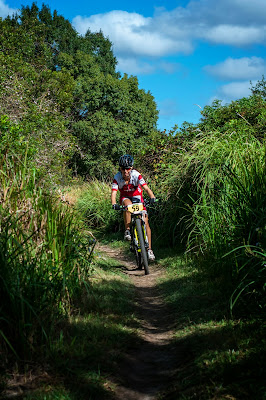 When the whistle went off I knew I messed up again, just like most of my recent starts I didn’t clip in properly and every second wasted doing other things than smashing pedals on the start was getting me further and further behind the ladies. I really need to refresh my starts! The ladies took off in the supersonic speeds tucked all together in the fast train while I was battling the headwind on my own. It was a lost battle. It didn’t take really any time for me to start feeling the burn in my legs. Yep this sensation was about to stay with me for most of the race. I was very disappointed and sad. Each pedal stroke created this - known to us bikers - amazing burn in the quads, that kept just repeating and repeating, and my bike felt like it was standing still, even when I was in reality pulling some decent speeds. 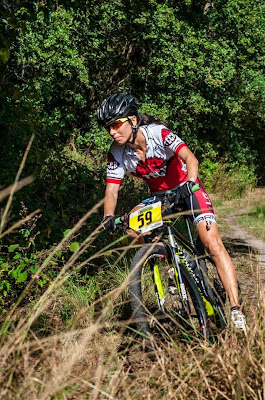 I just remember biking on my first lap and chasing and then chasing some more and not getting anywhere. I was just shaking my head but kept on trying. The worst parts for me where the ones that normally would be the most enjoyable sections of the trail system; let’s say like Fingers, with all the techy, power and skill needed parts which really required a fresh set of legs. This is where it stung the most and I was moving upwards like molasses instead of charging like I should. I had a battle with myself listening to the good and bad voice in my head, one telling me to back off and just treat it as training, while other encouraging me to keep on trying. I was torn at times but my personality overridden it once more and I was going to give what I got. Two laps of the same scenario went by, I was aching to enjoy it but it was so tough to do so, well until the final lap. Something changed, but I really don’t know what, the pain subsided, 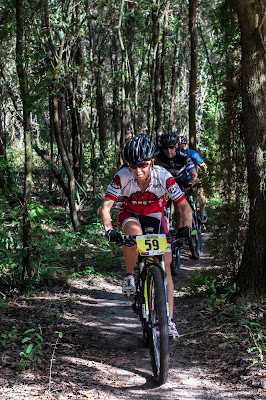 I got some miraculous second wind or just some extra energy which I would not expect on the final lap and my speed started to pick up. Was it the Clif Shot I take after each lap? Not sure, but whatever it was it felt good. Being told that I had Shelly, which took off from the start like a greyhound hungry for victory was only 35 seconds ahead changed a lot also. It was all I needed to hear. I transformed once more to this driven and inspired racer and kept reducing the gap as much as I could and finally made my pass with less than three miles to go. It was after coming out of the fingers on the wide and open dirt road which led us to the narrow but fast single-track. Lots of small trees and sudden turns were in this section and I was coming in hot into some close standing trees and it happened. 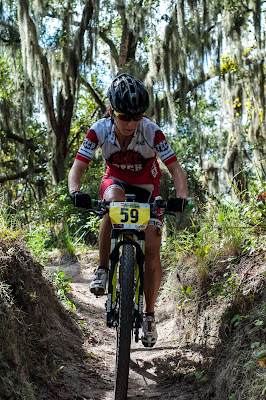 The left tree clipped me on the left shoulder sending me to the one on the right where I jammed my right shoulder full speed. It hurt so bad my scream echoed in the whole forest. I screamed a few more times while already on the bike and rushing toward the finish. The final stretch of the course after leaving the beautiful trails was brutal and I was welcomed with an amazingly strong headwind and experiencing even more agony…


I got to the finish in the 4th position and first thing I rushed for was a nice bag of ice that would go straight on my poor shoulder.

Considering all the circumstances I am still very happy with how I rode on the third lap of my race, well besides the tree collision, and also with how I performed during the short track.

I find this park quite beautiful and awesome to ride in and I can only wish I could have ridden a little faster and fresher this weekend. 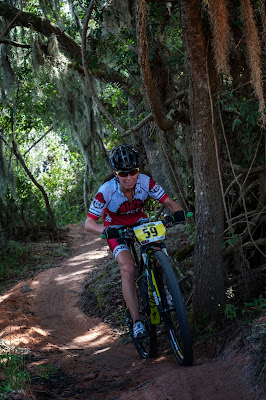 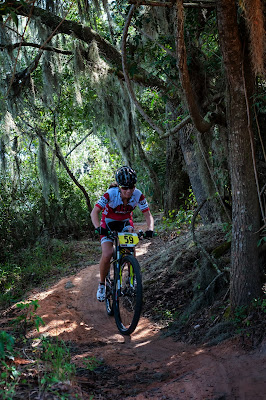 My arm hurts now and looks like a mini unicorn, none of which is good. Can't really lift anything or move it much. Simple things like dispensing soap or getting pepper out of the pepper shaker are tough, so I am learning new skills of doing some little things with my left hand. It’s quite enlightening to see how we depend on a single arm. But seriously let’s hope a few days of rest will take care of it and I will be back to normal. 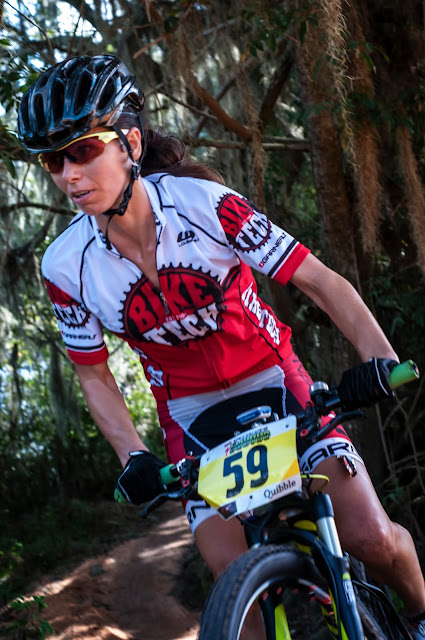 Like always I had great time, my husband was my personal paparazzi chasing me all over the forest until the finish line, where he admitted he couldn’t keep up with me and that was the reason we didn’t get the finish picture… :)

But really it was awesome to hang with all you guys and girls out there and just simply get out and bike!!!