Caloosahatchee Regional Park is one of those places where I see a good amount of people loving to ride in but also good part not liking it so much, and I belong to the latter.

For some reason I never place good in this race and really it is one of those that if I could afford to skip the race that would be the one. There is nothing wrong with the park really but also nothing that makes me excited about it in any way too. The technical sections are somewhat tough and challenging and hilly, but most of the course is flat like the lake on a windless day. Mostly we are riding through the constant sandy flat switchbacks for miles at a time with no berms in them and being surrounded by grass or something that looks like dried up sugar cane. 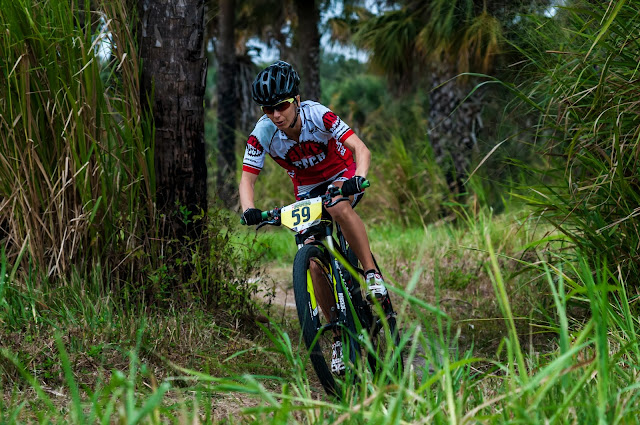 Worst part for me is what I call “deep dark forest”  were we are biking in creepy darkness, dead leafless shrubbery, sharp severed branches which are leaning towards the trail and are really low so you have to duck often and all of it is on a rooty and tight path. I feel I am out of my comfort zone there and totally stripped of speed. Not surprisingly I lost most of my time in this section during the race. So maybe it’s me, but I saw people coming out of this trail looking like the panther attacked them! And by the way there was a Black Panther statute right next to the new gooey and muddy section with three steep and sudden climbs that would cause lots of trouble during the race for many racers including myself… 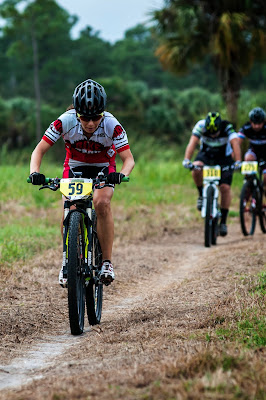 So with part of me wishing that I stayed home, there was another aspect that made me happy that I made a trip. We had great group of friends pre-riding the course together and simply sharing the joy of riding a bike. There was myself, Pax, Wally, pixie Zee, Dave and his friend.

We had fun that day on the course and off with ending the day on the good note grabbing some beer and pizza at a local place.

Also the whole Bike Tech Teams showed up on the race site and the Team tent was buzzing full of riders ready for a great weekend. Some of them camped out in the park and made a nice bon fire which is really cool.

On the race morning I made it to the start line maybe two minutes before the start. The wait to only one bathroom in the park was substantial and I didn’t want to waste my time going there earlier on. 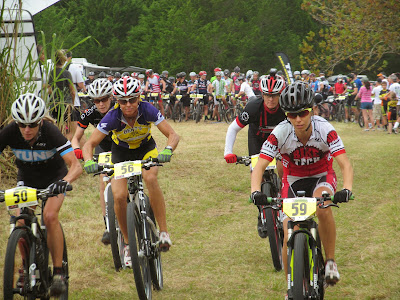 I rushed through my gear making sure everything is ready, helmet strapped, shoes tight, Garmin reset, Rammstein on and I guess I was ready. Whistle went off in no time and we were gone. Miracle, one of not that many times I clipped properly and was able to accelerate from the start, seconds later I was head to head with Carolyn and at some point I was in the lead. After the grassy turn I let Carolyn and Shelly go by since they have sickly fast first lap times and there was no reason for me to be in their way. I was really hoping I could keep up with them for the whole windy and whiny grass section but somewhat I kept falling behind. That meant more wind resistance for me and more work to be done. They were right there just a few bike lengths in front but still I was not on their wheel. When we dived in to the first technical part I had Kathy’s wheel disappear so close to mine. But with passing time the gap kept getting bigger. And even though I still could see the ladies when we got out on another grassy flat part I was now further back.

The moment we got to the 5 mile mark that goes deeper to the forest, where the panther statue resides the gap got even greater. I really didn’t enjoy this section, maybe besides of for the more technical and hilly parts which were all right. And then the rows of male riders showed up and now it was for the rest of the lap mission to figure out how to let them pass safely.  Most of the guys were super cooperative but two of them decided to besides me moving to the side, ram my back wheel and hit me on my bad shoulder and make me stop in front of leaning on a dead tree. They mumbled something about them being 30 seconds behind but I said “I would have let you by in civilized way if you allowed me to” and they biked away. I still see his outfit with big blue star and red stripes stuck in my head from this experience. At some point I just went to the side and stood with my bike in my hand waiting for a group of other guys to go by. I am really getting bummed about it. To be honest putting all little losses of time during a long 25 mile race together would add up to a significant time loss. But this would not really matter much since I was so far behind the leading girls. 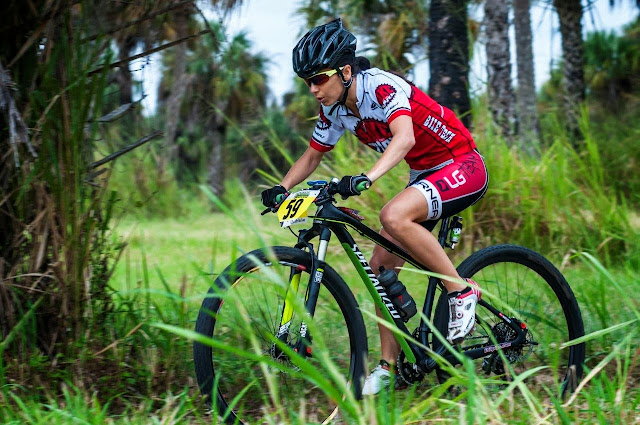 I knew I was riding in 4th and was really focused on and chasing for 3rd but didn’t know how far in front the third rider was. I finished first long lap of 10 miles with quite a deficit and was able to speed up some on the second lap. I made the same mistakes on the slimy hills and lost some time there once again. At some point I asked my husband to give me a time split but instead he said “don’t worry, you are fine, take your time”. 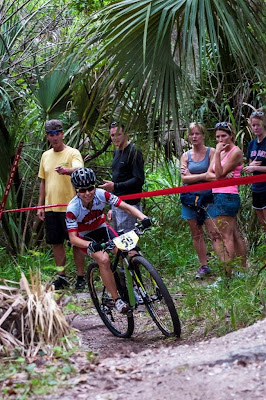 This is not what I wanted to hear, I got upset and more upset with each time I would see him and he would refuse to give me a number. Am I really that far behind that he doesn’t want to tell me? I really needed to know, I didn’t care at that point if it was 5, 10 or 20 minutes I just wanted to know where I stand. To be honest it made me so mad that it fueled me to pick up my speed and bike way faster, especially on the final half of the 2.5 lap course. At some point I got the number out and he said “4 minutes” which didn’t sound to me too convincing and I knew there was something fishy about it but didn’t know what. But if it was the truth, 4 minutes is a lot but at the same time so many things can happen during the bike race that I was not going to slow down because of it and pushed even harder on the final miles. 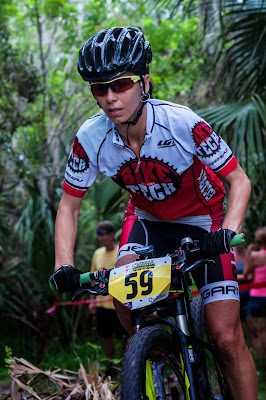 When I crossed the finish line I still didn’t know what place I finished in. Well it was not rocket science since there was not that many of us girls in this class today but how could I have known that Shelly pulled from the race after the first lap? I didn’t. Therefore for most of my race and especially on the second and short third lap I was chasing a ghost. That was a bummer that no one told me what was going on while I was spilling my guts out there for almost two hours but at the same time it made for a nice and unexpected surprise to finish in 3rd. I would have preferred to catch up to Shelly and win this challenge in the proper head to head competition like we did in the last race but this was out of the control on my side. 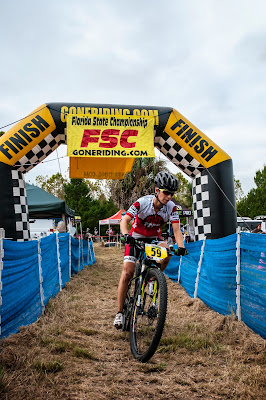 I remember having times when I was thinking a lot about my cornering, about my cadence, my heart rate, when I was asking myself if I am giving all of what I got, if I am trying hard enough. Overall I think I did handle the course way better this time around and especially the open flat parts which would cause me a lot of trouble in the past years. So I was happy about that. Weird part about it that I felt like I knew I could have pushed more but at the same time the weirdness of the course or just my riding preference didn’t allowed me to do so and I felt I was halted back all the time by all those never ending turns of the Alva course.


What I also remember from the previous years was this burning sensation and such a difficulty with many climbs on the course, which this year really beside the new slimy ones on the back side felt completely fine. That’s a great feeling knowing that things are getting better little by little. 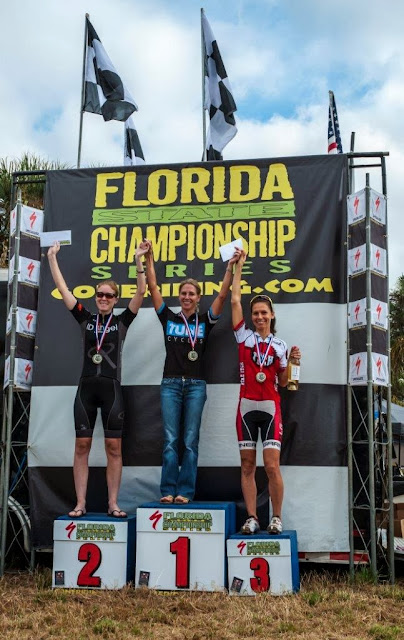 After the presentation and first podium finish in the main race (Yey) I went for a nice 6 mile run with my Salomon Mantra's and the company of a friend – Scott Huntley. This was a perfect ending to the day and I was happy to head home.

Also I had great pleasure meeting during the race the fastest rider out there Drew Edsall and also a sponsor of our Florida Series representing the best bike manufacturer on the planet Fred from Specialized. 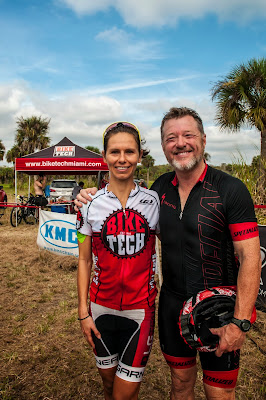 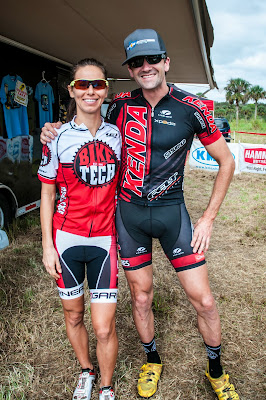 I wanted to thank my friend Michaela which by the way destroyed the course and placed first in the Sport class for looking over my banged up shoulder during last week's race. Very appreciated! 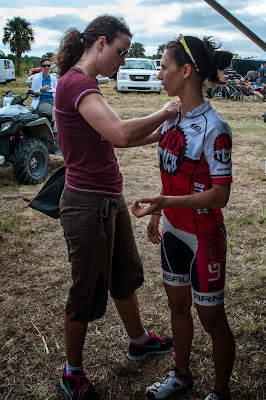 And like usual big thanks to my husband Pax and all my amazing Sponsors: 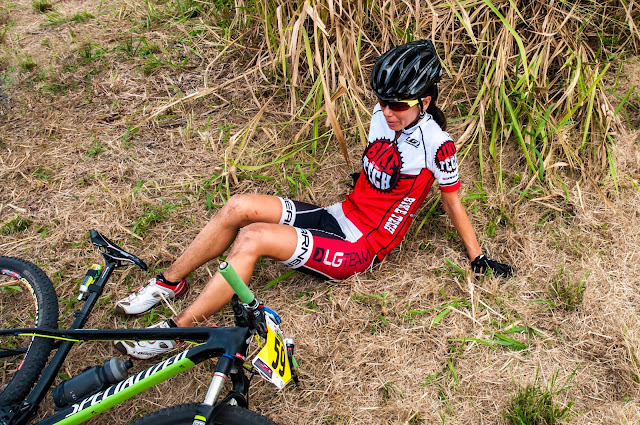